There will be college football this weekend. The schedule, however, is slimmed down with several cancellations across the country due to the COVID-19 pandemic, including four scheduled SEC games.

Despite the adjustments, there are still several matchups worth keeping an eye on in Week 11.

The biggest story line centers on No. 2 Notre Dame's attempt to rewrite history after its last defeat of a No. 1 team 27 years ago. The Irish aren't the only team that will need to manage their emotions after a huge win. Florida could face a challenge one week after its big win against rival Georgia.

COVID CONCERNS: When SEC commissioner is 'troubled' then we must listen

There are a couple of key Big Ten games on the schedule that are worth attention as favorites in the East and West divisions hit the road for games that may post some problems.

The Pac-12 season enters its second week with its top contenders hoping to build their cases for inclusion in the College Football Playoff.

A look at the five biggest questions for Week 11 in college football:

Is it possible to predict Michigan-Wisconsin?

In a word: maybe. It's harder to get a gauge on Wisconsin, which dominated in the opener against Illinois but has since missed the past two weeks while getting a handle on a COVID-19 outbreak. In addition, it's not clear if quarterback Graham Mertz will be cleared to play Saturday or if the Badgers will need to rely on backup Chase Wolf. But Michigan is almost as unpredictable, even if the Wolverines' play against Michigan State and Indiana paints the picture of a team set to finish among or below the middle of the pack in the Big Ten. At least the Wolverines have played, however. That Wisconsin is stepping back into the season after a prolonged break makes it nearly impossible to peg how the Badgers look in prime time. 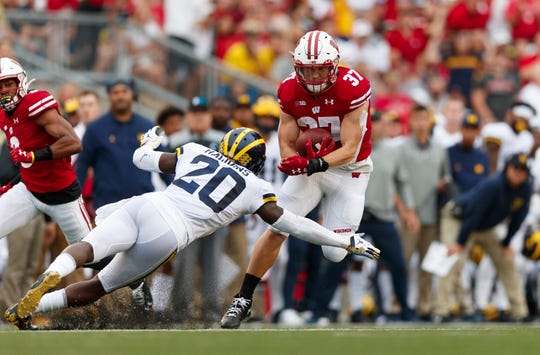 How does Notre Dame avoid a letdown?

When the Fighting Irish knocked off No. 1 Florida State in 1993, their next opponent was Boston College. A loss to the Eagles proved decisive in keeping them from playing for the national title game at the end of that season. Notre Dame travels to BC this week seven days after beating top-ranked Clemson in double overtime. The parallels are unavoidable. History will surely keep the Irish on their toes, but the emotional high of last week's win is going to be an obstacle. And the Eagles, like in 1993, are a quality team. It's a great test of the character and talent of Brian Kelly's team to be asked to push aside all the external issues and focus on the task at hand. How the players come through will say a lot about their ability to contend for a title.

What to make of Southern California?

USC is undefeated after one week. The Trojans, however, didn't much look the part of Pac-12 or College Football Playoff contender for 57 minutes of their opener against Arizona State. They were sloppy, committed four turnovers and needed two late touchdowns to pull off an unlikely win. Was the victory a warning that things are amiss, or was it a positive display of the team overcoming adversity? USC's visit to Arizona will provide an answer. The Wildcats aren't great, but they are capable of an upset. The Trojans must be focused and avoid playing down to their competition. The game will go well if that is the case. If not, look for another close game that probably indicates this team is going to be more good than great this season.

After tossing another four touchdowns in last week's win against Georgia, Florida quarterback Kyle Trask has risen into the top four of the current Heisman Trophy race. As the only ranked SEC team in action Saturday, the Gators (and Trask) have a chance at making another statement against Arkansas. But the offense could be without star tight end Kyle Pitts, who was injured against the Bulldogs, and the Razorbacks' pass defense has been solid, if somewhat unpredictable. While Arkansas did shut down Tennessee, Ole Miss and Mississippi State, the Razorbacks also struggled to stop Texas A&M's Kellen Mond. Even if Pitts is slowed or sidelined, Trask should be able to maintain his current pace.

Will Indiana get tripped up Michigan State?

It's not like Michigan State isn't capable — just look at what the Spartans did to Michigan. On the other hand, the Spartans also lost to Rutgers and were destroyed by Iowa. Another important note: Indiana is clearly better than the Wolverines. So most signs point toward the Hoosiers moving to 4-0 and one step closer to the program's best season in decades. The Hoosiers' sputtering running game is a concern, though, and the lack of total balance between the run and the pass could give Mel Tucker and MSU an avenue toward slowing down quarterback Michael Penix Jr. and the IU offense. Taking advantage of that blueprint would require cutting down on the turnovers that have plagued the Spartans through three games.