Major League Baseball owners, with an abundance of optimism that baseball will be played this year, are scheduled to vote on a plan Monday that will require teams to share at least 48% of their revenue with the Major League Baseball Players Association this season, two people with direct knowledge of the proposal told USA TODAY Sports.

The people, who spoke only on the condition of anonymity because they were unauthorized to discuss details, said the historic revenue-sharing plan is integral to diminish revenue losses with games potentially being played without fans beginning in July. MLB officials say that teams are expected to lose about 40% of their gross revenue from ticket sales, concessions and parking.

This would be the first time in history that MLB clubs would be willing to share their revenue with players, although it’s common in other sports. In the NFL, players get 48% of revenue, and NBA players receive between 49% and 51% based on expected income.

HOW MUCH RISK FOR BASEBALL? Elected officials preach caution about bringing back MLB too soon

The proposal was initially shared with owners Thursday, revised Friday on the owners' executive committee call and will be formally submitted for a vote on their noon ET conference call Monday, according to the two people.

The union has balked at the idea that players should take a further pay cut since they already will lose about half of their annual salary with the season being reduced to about 81 regular-season games. They have already agreed to be paid on a pro-rated basis in their previous agreement on March 26, which granted players a full year of service time if no season is played. 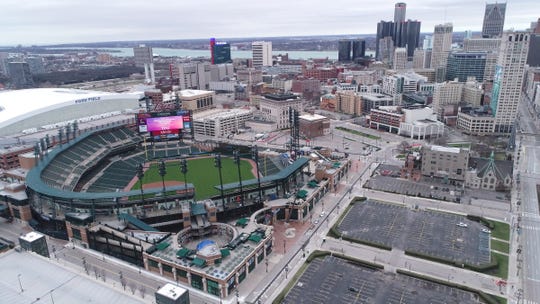 MLB is trying it's best to get back on the field and start the 2020 season. But there's still plenty to be decided. (Photo: Mandi Wright and Kelly Jordan, Detroit Free Press)

The owners’ proposal also outlines details on scheduling. Training camps, as previously reported by USA TODAY Sports, will begin in June with opening day scheduled for July 1-4. Teams will have the option of hosting spring training 2.0 at their home facilities or at their spring-training complexes in Arizona and Florida, with the hope that all teams can stage games at their own home ballparks during the season.

According the two people, the traditional two-league- six-division structure will remain, but teams will only play opponents in their division and the corresponding geographical division from the other league. So a team such as the New York Yankees would play only against their AL East opponents and the NL East, while a team like the Los Angeles Dodgers, who weren’t scheduled to play the Houston Astros, now would play them at least six times.

The owners have also agreed to expand the postseason from 10 teams to 14 teams, adding an extra wild-card round, the two people said.

They will also vote on whether to implement a universal DH, which likely will be necessary considering that interleague play will constitute about 40% of games.

The active rosters are expected to be inflated from 26 players to 30, with a 20-man taxi squad consisting mostly of an organization’s top minor-league players being available all season.

If teams are unable to play in their home ballparks, at least at the outset of the season, they could choose to share a major-league facility with another team or play at their own spring-training complex. Yet, the preference by all owners is that the games, even with no fans, are staged at their own ballparks.

MLB initially considered extending the season through Thanksgiving weekend, playing regular-season games through most of October, but with a fear of a second wave of COVID-19 in the fall, believe it would be safer finish the season no later than the first week of November.

MLB cautions that their plan remains fluid with the unpredictability of the COVID-19 pandemic, requiring the approval of health experts and governmental officials.