Ash Barty has revealed her next sporting move, agreeing to play in a global golf tournament expected to be televised live in Australia after wowing onlookers in a secret practice range session during last year’s US Open.

Barty, who stunned the tennis fraternity when she announced her retirement last month at the age of 25, will headline an exhibition event alongside some of world sport’s biggest names in New Jersey in June.

The Queenslander has taken out a stake in the Icons Series concept, which she hopes to bring to her home country early next year.

Global sports executives are in discussions with both the NSW and Victoria governments about which state it could be played in.

It is the firmest indication Barty will devote more of her post-tennis time to golf, with fiancé Garry Kissick a PGA trainee professional. 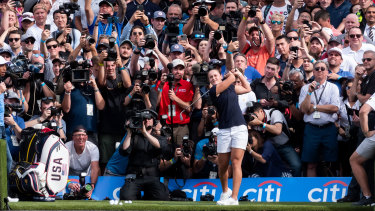 Ash Barty takes part in a promotional event before the 2019 Presidents Cup.Credit:Getty

“She did a range session with Ian Poulter, who is one of our future captains in September when she was at the US Open, and she had not hit a golf ball for a while. Ian said, ‘just hit a few balls and we’ll see how you go’.

“He said, ‘oh my goodness, you are something else’. She’s got those skill sets within her locker. With a bit of practice she can get lower than a three or four handicap. I know she’s really, really excited to be playing in New York and she’s also really keen to bring the concept to Australia.”

He said, ‘oh my goodness, you are something else’. She’s got those skill sets within her locker.

The tournament will be shown on American network NBC and is also expected to be broadcast into dozens of countries around the world.

Barty said she was keen to bring the Icons concept to Australia.

“I’m excited to be part of the Icons Series and I hope through my participation in the series that we can encourage more women and girls to participate in golf around the world,” she said. 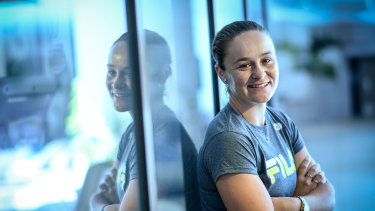 “The series is also a great opportunity for athletes to have an impact on local community and charity projects in each of the host destinations.

“It’s such a unique opportunity to have fun, test yourself and compete against the world’s greatest athletes in a sport that we are all so passionate about. I can’t wait to experience Liberty National and learn from our iconic captain Ernie Els. I hope all the Aussie fans in New York and New Jersey come out to cheer us on.”

Barty shocked world sport when she announced she was quitting tennis last month, only six weeks after being the first local to win an Australian Open women’s singles title in 44 years.

She was also the reigning Wimbledon champion set to defend her crown in 2022.

While she has asked for patience in announcing her next career move, her interest in golf has only heightened after lending her backing to the Icons start-up.

The concept is based on the hugely popular golf teams events such as the Ryder Cup and Presidents Cup, which pits the United States against Europe and the Internationals respectively.

Barty’s swing even caught the eye of Tiger Woods when she took part in a promotional event before the 2019 Presidents Cup, hitting balls into Melbourne’s Yarra River.

“Ash is such an amazing role model and she’s an obvious choice for us an athlete who absolutely transcends her sport,” Brookes said. “She can play cricket, she’s a great golfer and has nailed it in tennis.

“As important as that is, she’s a terrific human being first and foremost. There are not many global, female athletes who have a serious golf game. That’s one of the requisites for us, they have to be single-figure handicap golfers who can compete.

“This is not a hit and giggle, it will be quite competitive and there’s going to be 15,000 people there and a global TV audience. It’s not really for the faint-hearted. She’ll be on the big stage when it comes to this event.”

The first Icons Series event will be played from June 30-July 1.