‘I could take out of my life everything except my experiences at St Andrews and I would still have had a rich, full life.’

The famous words from a bygone age belong, of course, to the greatest amateur of all, Bobby Jones. But how resonant they appear when looking back over the 25 years since Tiger Woods first set foot inside the enchanting gates of Augusta National.

In 1995, Woods felt he’d stepped inside ‘Disneyland, fantasyland, all rolled into one’, when he cast his eye over the course that Bobby built, to make his debut in the tournament that Jones created. 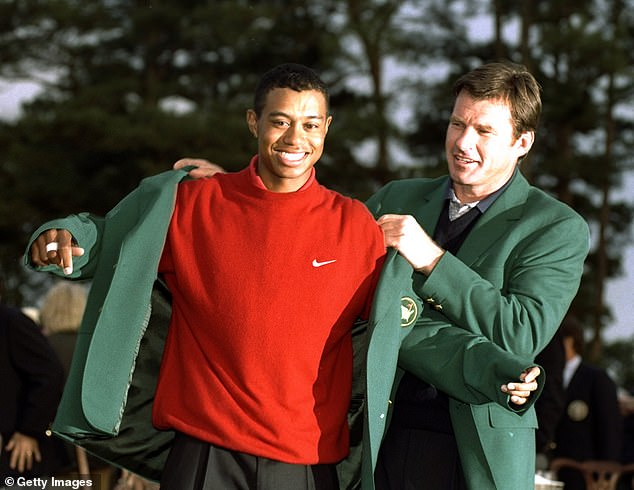 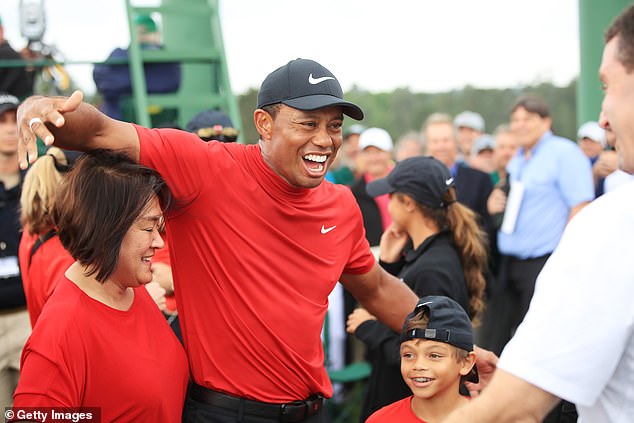 The 21-year-old who fell into the arms of his father upon winning for the first time in 1997 was a parent himself and hugging his own children by the time of his redemptive triumph last year.

From the rapture of finishing off the greatest sequence of golf in the game’s history with his victory in 2001 to the devastated figure at the Champions Dinner in 2017.

There, he was a man so broken with pain that he couldn’t sit down owing to his chronic back condition and confided to Jack Nicklaus that he thought he was done.

Yes, at the cathedral that lies at the end of Magnolia Lane, Woods has witnessed and achieved so much.

‘I was in college when I started off at Augusta in my first major championship,’ recalled Woods recently.

‘I got to stay in the Craw’s Nest in the clubhouse with all the other amateurs. I got to watch Sam Snead, Byron Nelson and Gene Sarazen tee off on the first hole.

‘They’re just priceless memories and now I get to enjoy it from the champion’s side, to hear all the stories, the hazing and needling, the triumphs and the losing. It’s been a part of my life since I was 19 and now it will always be a part of my life. I just feel incredibly lucky because it’s unlike anything else that we have in our sport.’ 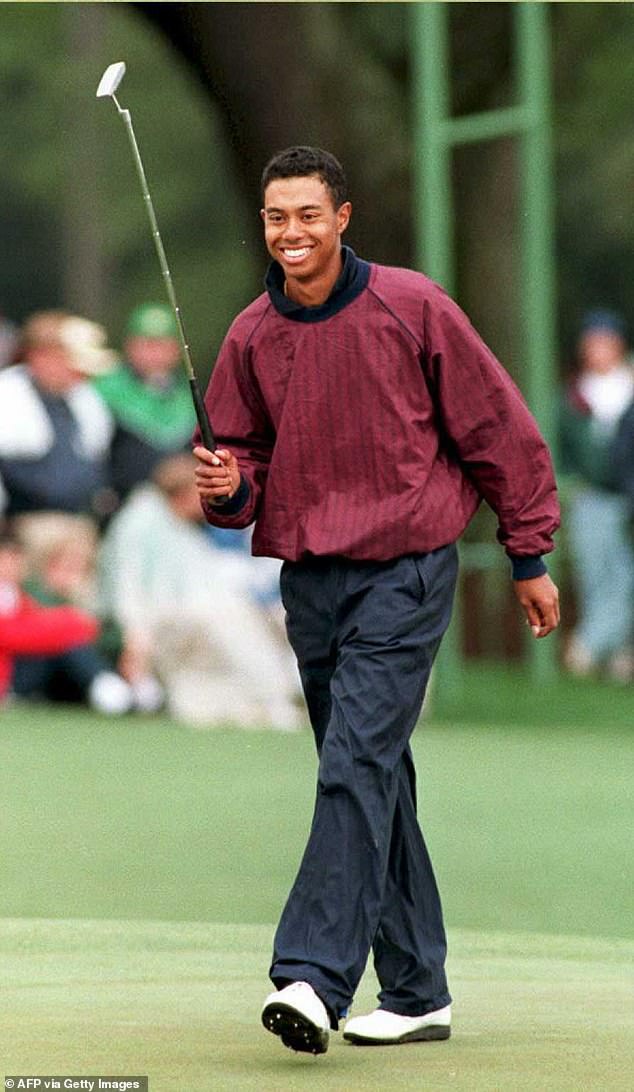 Woods has been responsible for the dramatic lengthening of the course on not one but two occasions. ‘Tiger-proofing’ they wittily called it — but he still found a way in 2019. That was his fifth victory and only Jack Nicklaus, with six, has more.

Woods’ inestimable contribution to Augusta lore is vividly illustrated by an assessment of the greatest moments in Masters history. Any list of the top five features at least two of his victories.

Any selection of the top five shots has to include his chip at the 16th on his way to victory in 2005. Was there ever another golf tournament like last year’s, where it felt like the entire western world had stopped what it was doing to sit open-mouthed to savour his triumph for the ages?

Well, perhaps his first major as a pro — the Masters in 1997. Six months after his ‘Hello, world,’ introduction, courtesy of Nike, Woods had already picked up a couple of victories on the PGA Tour. 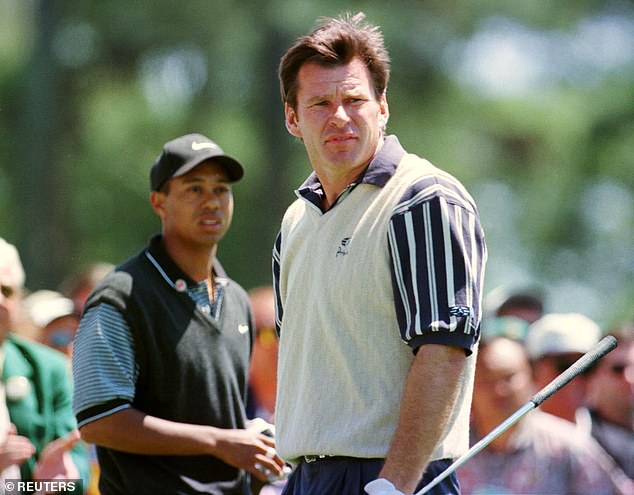 Now, though, we would see if he really was the chosen one. Paired in the first round with defending champion Sir Nick Faldo, he looked anything but when he played the front nine in 40 shots. Shamefully, one or two patrons rather enjoyed watching the newcomer with the dark-coloured skin go from one collection of pine trees to another.

Then the fun began. A back nine played in only 30 strokes was followed by a 66 for the halfway lead, with Colin Montgomerie his nearest challenger. ‘We’ll see how he does in the third round,’ said the Scot, playing a few mind games.

On the second hole, Montgomerie cracked one of his best drives. When he reached it, he discovered that Woods’ tee shot had bounded down the hill and was 150 yards ahead. It proved the start of a shattering afternoon as Woods beat him by nine shots.

Monty was still recovering from shellshock when a reporter asked him if he thought anyone could catch Tiger in the final round. ‘Have you not seen what I’ve just seen?’ he replied. 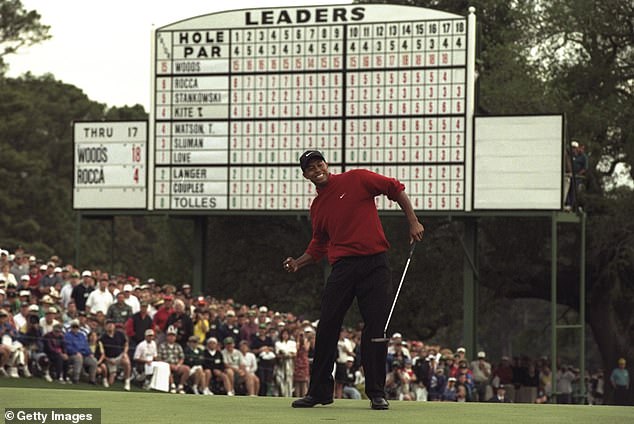 The following day, Woods pulled further and further away for an astounding 12-shot victory. It was the first major triumph of the 20th century to be won by a double-digit margin.

It was the start of many signature moments, of course.

When it came to achieving the ‘Tiger’ slam and holding all four majors at the same time, it seemed only fitting he should complete the set at the 2001 Masters. Woods rounded off perhaps the greatest of all golfing feats with a drive that might still be the longest ever seen on the 18th, travelling nearly 400 yards. He looked invincible.

All sorts of these memories would have come flooding back this week, of course, when this year’s Masters was supposed to be played before the coronavirus pandemic intervened. 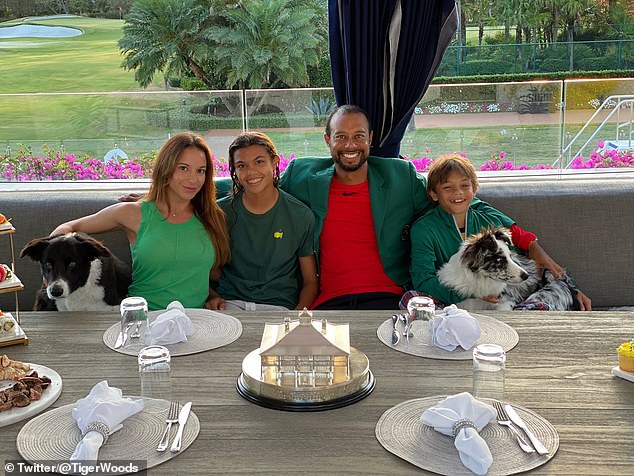 But perhaps providence has given Tiger a helping hand. Hindered once more by a stiff back that had kept him from playing since early February, he couldn’t possibly have been competitively sharp for his attempt at a successful defence.

Might the picture be radically different come November and the rescheduled event?

In the meantime, he left us with a delightful picture on social media on Tuesday. All that the Masters means to him was obvious in the snapshot taken on the night he should have been hosting the Champions Dinner.

He was sitting around a dining table alongside his children, Sam and Charlie, and his girlfriend, Erica. He was wearing his green jacket and underneath was written: ‘Masters quarantine dinner. Nothing better than family.’