One of the questions surrounding Tiger Woods' car crash is why he wdriving alone on that dangerous road in Southern California early Tuesday morning.

According to the Los Angeles Times, Woods was on his way to a video shoot with NFL quarterbacks Drew Brees and Justin Herbert.

The story cites "two people familiar with the production who were not authorized to comment," who say the NFL stars and production crew for the GolfTV series titled “Tiger Woods: My Game” were kept waiting for about two hours when Woods didn't show up at Rolling Hills Country Club for the scheduled 8 a.m. start.

According to the Times report, the Discovery+ streaming service – of which GolfTV is a part – usually provides transportation for the stars of its shows. However, Woods is known to prefer driving to events himself. 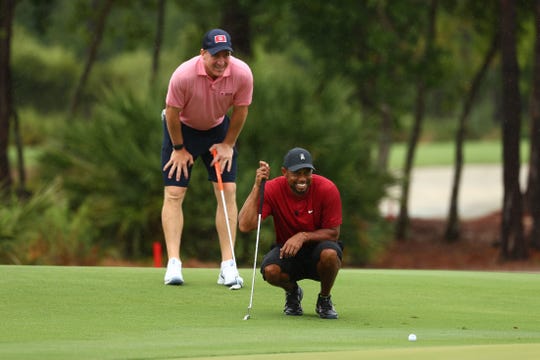 Tiger Woods is no stranger to playing golf with current and former NFL quarterbacks. Last May, he partnered with Peyton Manning at a made-for-TV event, The Match: Champions For Charity. (Photo: Mike Ehrmann, Getty Images)

The series, which was being directed by Peter Berg ("Friday Night Lights," "Ballers") was part of a four-year deal worth an estimated $35 million that Woods struck with Discovery in 2018.

Berg shared a photo on Instagram from the first day of a two-day shoot, saying he and the crew were "heartbroken" when they found out why Woods didn't make it to the set on Tuesday.

"Tiger told me yesterday that he is 'never out of the fight' I believe him," Berg wrote.