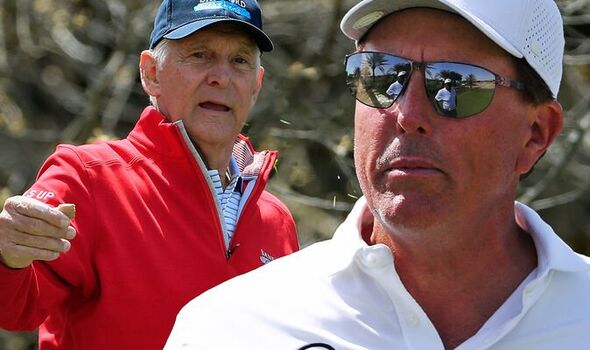 Phil Mickelson has “paid the price” for his involvement in the controversial LIV Golf Series with Andy North unsure whether the golf icon’s reputation can recover. Little under a year ago, Mickelson was on cloud nine as he became the oldest major champion after his historic win at the PGA Championship.

But ‘Lefty’ has now taken a self-imposed sabbatical from the PGA Tour following comments about the Saudi-backed golf league surfaced earlier this year. Mickelson caused a stir at the end of 2021 when he put his name to Greg Norman’s breakaway league.

Mickelson was one of the first to throw his support behind the project, but writer Alan Shipnuck published comments in February the American made about the Saudi-backed league where he said they were “scarymotherf******” and had a “horrible record on human rights”. He was then exposed for saying that he was using the LIV Golf Series as leverage against the PGA Tour.

An apology followed a week later with the 51-year-old announcing that he will be taking some time away from the tour. He ended up missing The Masters and now won’t defend his PGA Championship title this week.

All eyes will now be on whether he competes at the inaugural LIV Golf Series event in London next month. But North believes Mickelson has already suffered the consequences of his actions. When asked whether the six-time major champion’s reputation can recover, North told Express Sport: “I don’t have any idea.

“He’s the defending champion. What he accomplished there last year was absolutely amazing. But again, Phil has been outspoken and he’s paid the price it looks like from a sponsorship standpoint.”

Most players who have come out and shown their support for the LIV Golf Series are those who are in the twilight years of their career. Both Lee Westwood and Sergio Garca have asked the PGA Tour for a release to play in the first LIV Golf Series event at the Centurion Club from June 9-11.

Garcia caused a stir when he appeared to hit out at the PGA Tour during the Wells Fargo Championship where he said “I can’t wait to leave this tour”. But North has taken aim at those who have attacked the PGA Tour with many making millions during their careers.

“I don’t understand how a guy can do that,” he added. “What Sergio did. Yes he got a bad deal. He popped off as we know he can but the fact that guy has made over $50million on this tour.

“There’s a lot of guys who could have gone over there and taken huge amounts of money and they haven’t done because they think it’s not the right thing to do. That’s their decision and I give them credit for doing that.”