Sandwich, Kent: It is no surprise when Louis Oosthuizen’s name sits on top of the leaderboard. The man with a full set of second-place finishes in majors is usually a contender after all, but this one was noteworthy as it is the first time he has done so in a British Open played anywhere but St Andrews, a course where he has slept on the lead five times and won his only major (in 2010). He also lost in a three-man play-off five years later.

Anyone who witnessed the first seven holes of his first round and saw the South African reach the eighth tee at level par may have been surprised at the upshot, however, as from that point in he made birdies at six of the 11 holes to finish on six-under and bogey free.

“I think I probably would have taken seven pars again,” he said wistfully. “I’ve learnt over the years playing major championships that patience is the key thing and even if you make bogeys, to know that a lot of people are going to make bogeys.”

Ooosthuizen finished second to Phil Mickelson in May’s PGA Championship and third in the US Open last month, and at the age of 38 he must be wondering when, or if, he is going to land a second major. That said he says he finds it easy to compartmentalise the near-misses, loves his Ping Voss putter dearly – he used it only 26 times in this round – and manages to switch off from the day job by driving a tractor around at the ranch he recently purchased in Florida.

“Louis is very comfortable in himself, and what’s where you need to be when you’re playing majors,” said Padraig Harrington, who has won three of them himself. “He does his thing and doesn’t try to be anybody else but Louis, and you see that with guys who are playing well. They’re happy with who they are.”

A shot further back on 65 are the American left-hander Brian Harman, who made birdies at the first and the last, and his countryman Jordan Spieth, whose good run started at the fifth and from where had four consecutive birdies before adding another couple on the back nine. 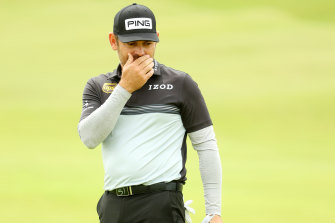 Louis Oosthuizen won the British Open in 2010 and holds a one-shot lead after one round this year.Credit:Getty

“To be honest, the path that I’m on and where I’ve been before in the game, I feel really good about my chances going forward, as good as they have been historically,” said Spieth, the 2017 champion.

Cameron Smith finished with a one-under 69 after teeing off in mid-afternoon and playing through the most difficult conditions of the day, the best of the Australian players in the first round.

“I thought I could get two or three back at the end but it wasn’t to be,” he said. “Aussie golf the last couple of months has been pretty strong and I’m sure the boys will get up for it tomorrow.”

Lucas Herbert is one of them and he had a level 70 after opening up with a double bogey while the 47-year-old Brad Kennedy produced a brave one-over 71 to be well-set to make the cut for the first time in his fourth major. Adam Scott was three over at 73 and Marc Leishman signed for a birdie-less 75. Jason Day had one to forget, finishing at five-over and tied for 137th. 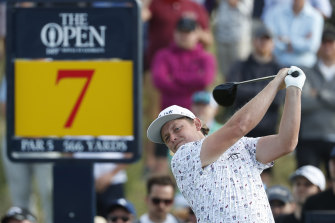 Stewart Cink, playing his 22nd Open in his 49th year, continued a resurgence which has seen him win twice this season and had a 66 to share fourth place with a group that includes South Africa’s Dylan Frittelli and Mackenzie Hughes of Canada.

“That’s a big part of links golf, to do the right guesswork,” said Cink, champion 12 years ago. “I’m hoping to get in the mix and give this thing a run like I did in 2009 and try to draw on some of those memories.”

Joining a large group on three-under which included Andy Sullivan, who was out in the first game at 6.35am, was 2016 Masters champion Danny Willett, Justin Rose, the 2013 US Open champion, and Tommy Fleetwood, whose effort was especially commendable given his late finish. Rory McIlroy was out in the same group as Smith and he made birdie at the last to finish on level par and earn hearty cheers from the grandstands before they headed for home.

The big-hitting Bryson DeChambeau adopted a conservative approach in the face of knee-high, lush rough, opted to use irons on some of the tees, but still hit just four of the 14 fairways. The 18th was the only one he found with a booming drive, however, but he missed a 12-footer for birdie that would have got him home in level par.

“If I can hit it down the middle of the fairway that’s great, but with the driver right now, the driver sucks,” he mused. “When I did get it outside of the fairway, like in the first cut and what-not, I caught jumpers [fliers] out of there and I couldn’t control my wedges.”

If Min Woo Lee did not know about the difficulties of playing major golf beforehand, he surely does now.

The 22-year-old arrived as the youngest-ever Scottish Open champion after Sunday’s win on a breezy but benign links course and he carried on in that vein on the front nine of his first round to turn at one under only for a back nine of five-over 40, including a triple bogey at the 15th, to leave him seriously under the pump at four-over 74. 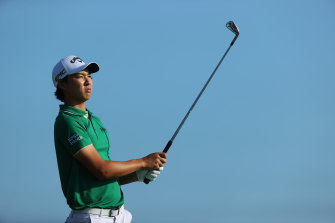 To his credit Lee strode over to the par-three 16th and sent his tee shot to within eight feet but as with so much of his play on the back nine, he missed the birdie putt and went on to drop another shot at the last to leave himself a big ask in the second round to secure weekend play.

“At 15 I hit a pretty poor drive and was in a pretty bad position,” Lee said.

“I tried to hack it out and put it in a worse spot but luckily I got a drop, I was on a mole burrow and there was like sandpits there. I hit it out to the right [of the green] and was in thick hay again and put it into the bunker. That’s Open golf. 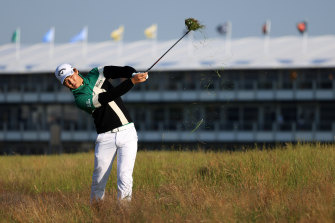 “For my first major I was enjoying it until I made my triple bogey, but there’s another day that I can bring it back. I think I handled myself pretty good other than that one hole. I mean, the crowds are awesome. I think I’ve been playing good because the crowds are back, and I love thriving off them. It’s awesome.

“Claps on every hole even though you made – even when I made triple bogey, they know it’s a tough sport and they clap.”

It had all started so well for the West Australian, a bogey at the first notwithstanding, after he set off at 7.30am in company with Christiaan Bezuidenhout and Sam Horsfield, and three birdies and another bogey got him up to joint third place on the fledgling leaderboard at around 10am.

He had chances to improve on that before he got to the 15th, too, but the putts would not drop and his approach shots began to miss greens and he had to scramble for par.

He gave shots back at the 12th and the difficult 14th, with a welcome par in between times as a threeball on the neighbouring Prince’s course paused on their teebox and peered over the fence as the Open threeball completed their formalities on the green.

“I didn’t putt too good at all today, it was tough into the wind and uphill, it’s crazy slow,” Lee added. “Hopefully I can get it done tomorrow.

“I’m mentally exhausted right now so I might not bother with the warm-down, I’ll just go home and relax because I’m pretty tired from last week.

“I think I got a bit caught up in just the golf round. I won last week; I should be happy. But I’m going to enjoy this afternoon off and hopefully play well tomorrow.

“I’ve got not too much pressure on my back, and it was very nice to get that win. I’m just going to go out there tomorrow and try and make a lot of birdies.”