A fabulous day at the AIG Women’s Open saw Nelly Korda live up to all the hype, a Scottish amateur live out a fantasy, and Georgia Hall demonstrate once more she lives for this event.

If the R&A needed any vindication for their faith in elevating its status, they surely found it in the starry leaderboard at day’s end, as the world’s best took advantage of the clement conditions.

World No 1 Korda set the tone with her 67 to finish as one of a trio of joint leaders from three different continents — Swede Madelene Sagstrom and Sei Young Kim from Korea were the others — but how about home amateur Louise Duncan, who was close to tears after a stunning 68. 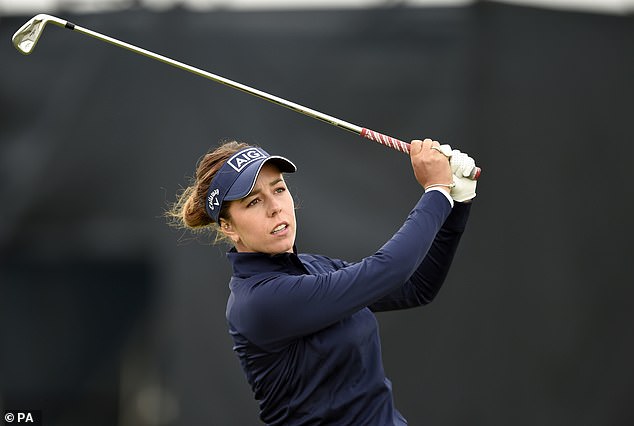 By her side, both on the course and on the leaderboard was Hall, from Bournemouth, who rekindled memories of her win in this event three years ago.

Korda was fooling nobody when she described herself afterwards as ‘just a lil’ girl, trying to play golf and enjoy herself’.

Only players touched with greatness finish birdie, birdie at Carnoustie. Only players who are the real deal rock up at this links for the first time and breeze round in five under.

The 23-year-old from Florida arrived here with a scoring average of a shade over 67 shots for her last 20 rounds, a blistering sequence that led to a maiden major success and an Olympic gold medal. The feverish expectation was understandable but could she sustain that run playing in a wholly alien environment?

Those six shots to cover the formidable final two holes that are potential card wreckers in anyone’s language — just ask Jean van de Velde — rather answered that one. 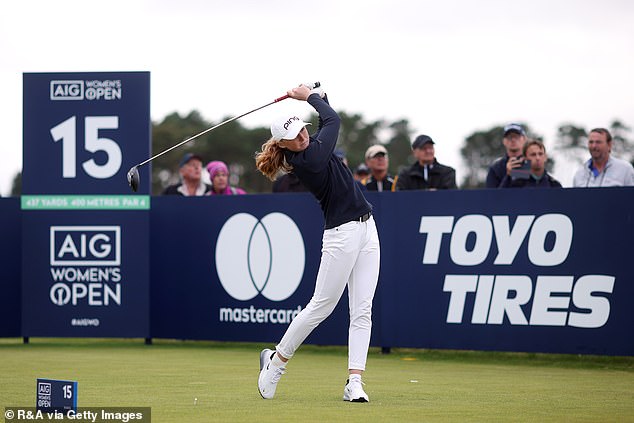 Hall’s love of this event is plain. ‘I get to play links golf so rarely, it’s just a lot of happiness for me and it was great to see all the people on the first tee,’ said the 25-year-old.

‘I don’t know how many will be there when I start my second round at 7.30am but I hope to see them all again on the back nine.’ As for Duncan, the 21-year-old Stirling University student got into the event as the British amateur champion and admitted she barely slept on Wednesday owing to her excitement.

It didn’t stop her assembling a remarkable back nine, where she went birdie, birdie, eagle from the 12th and followed it with four pars to lie tied fourth.

‘That was a really special day,’ she said. ‘I’m so happy we’re out early and I can just get up and get back at it. I can’t wait.’

This is just the third links course that Korda has played and helping her adapt is an equable temperament that’s every bit as impressive as her model swing.

Each of her three bogeys was forgotten by the time she reached the next tee as she bounced back each time with a birdie. 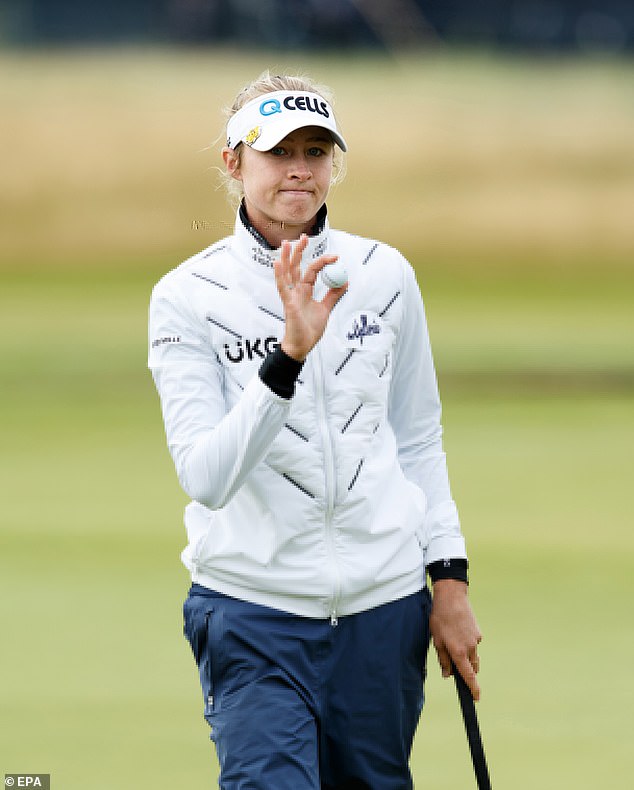 The last of those bogeys came at the par-three 16th. It’s no place to drop a shot, not with those terrifying final two holes to come, protected as they are by the winding malevolence of the Barry Burn.

Korda thought she had found the water hazard with her tee shot at the 17th but it pulled up two yards short.

From there, she floated a six iron to the right level of the green and rolled in the 6ft birdie putt.

It was one of only two birdies on that hole among the first 72 players to finish.

The other came from Kristen Gillman, who promptly double- bogeyed the 18th. That is invariably how it is with these two holes. If one of them doesn’t get you, the other will.

There is no place to hide at the 18th. Out of bounds to the left and a cavernous bunker to the right. Korda’s tee shot flew so true it finished 50 yards past one of her playing partners, Nasa Hataoka from Japan.

As the grandstand filled to capacity around the 18th green, she signed off in style with an eight iron to 10ft and holed that putt as well to close out her statement round.

Her other playing partner, England’s Charley Hull, struggled to a five-over 77 after making two double bogeys in her round.