‘Being Ryder Cup captain would be a fairytale dream’: Ian Poulter reveals his dream to skipper Europe in 2025, why he loves the team room ‘pranks and comedy’, but won’t talk about Bryson vs Brooks!

You can’t interview Ian Poulter at this stage of his Ryder Cup career without asking him whether or not he wants to be captain.

And the answer is a resounding yes.

‘If I’m in the position that I’m asked in 2025, obviously I would be thrilled and honoured to be in that position,’ he exclusively told Sportsmail.

‘But until that time comes where my phone rings and I’m asked, it’s a fairytale dream.

‘I can only say how amazing it truly would be. It would be an honour to have served Europe as a player and be asked to be captain.’ 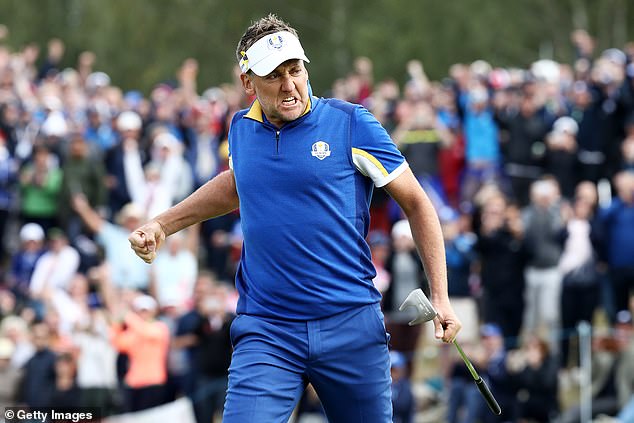 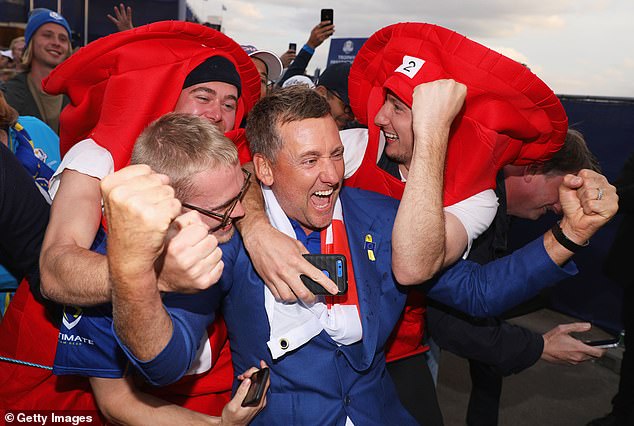 But first, there is the small matter of playing in at least one more and the possibility of a vice captaincy in 2023.

Europe’s men head into battle at Whistling Straits on September 24 and will be hoping to replicate a box-office performance from Catriona Matthew’s Solheim Cup team to retain the trophy they recaptured in 2018.

Poulter is the embodiment of the Ryder Cup so it would come as no shock to see him on the first tee for his seventh appearance. 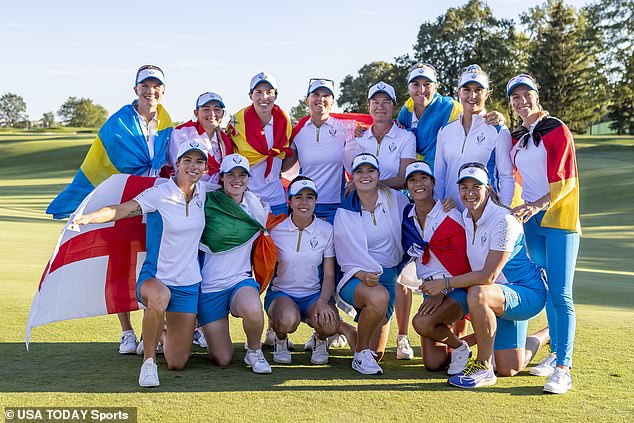 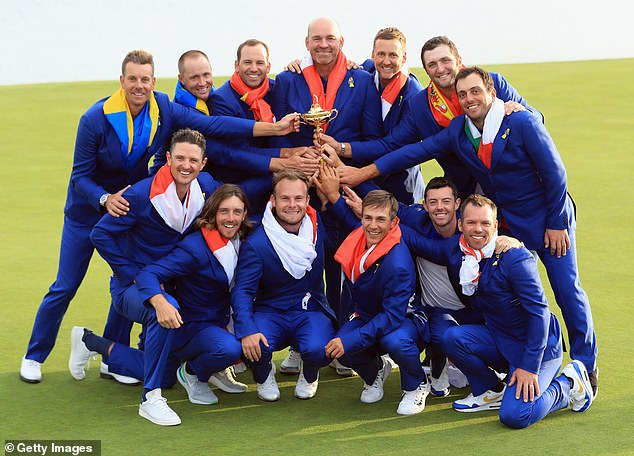 The Englishman currently hangs just outside of the qualifying picks so is relying on a wildcard pick from captain Padraig Harrington to guarantee him a ticket to Wisconsin.

Earlier this week, the Irishman revealed Poulter and fellow veteran Sergio Garcia were pretty much locked and loaded in two of his three available picks – barring any last-minute drama this week, when the European Tour hosts its flagship event, the BMW PGA Championship at Wentworth.

Harrington announced the duo were in ‘pole position’ as he revealed there were six players under consideration for the three spots.

Poulter believes he’s done more than enough to merit a wildcard pick from the captain.

‘I have played extremely consistently and I’m only just out of the team on points itself,’ he said.

‘A couple of guys are potentially in front of me and knowing that Harrington has three picks, I feel relatively confident that I’m close enough to the team to merit a pick. But it’s on Paddy.’

But even with the nod from Harrington seemingly in the bag, the world No 48 could still play his way into an automatic qualifying spot.

There hasn’t been a Ryder Cup qualifying race as tight as this one. A potential last-minute showstopper could be on the cards at Wentworth to shake up qualifying just before the deadline.

With Euro stars such as Rory McIlroy and Sergio Garcia forgoing the BMW PGA Championship – against Harrington’s advice – players such as Bernd Wiesberger, Victor Perez, Robert MacIntyre, Justin Rose and Danny Willett could snatch a last-minute ticket to Wisconsin.

A winning performance this week would be enough to boost Poulter into an automatic qualifying spot on Sunday. 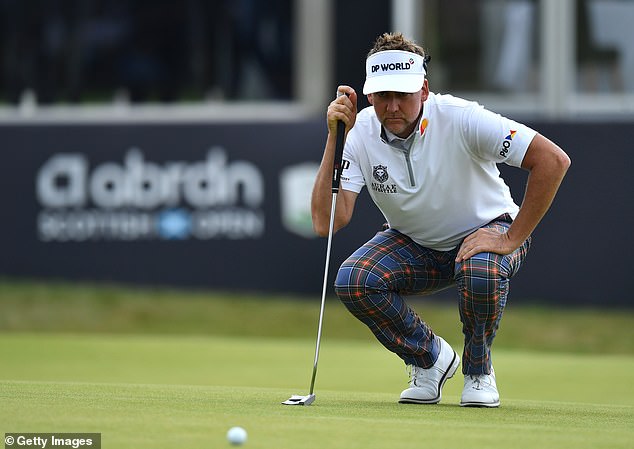 ‘I never go into a tournament saying to myself I’m going to accept anything less than winning. I’ve always been that way. And that is that is my mindset,’ he said.

‘If I start a tournament, whether I’m in great form or poor form, I mentally tell myself I’m here to win.

‘I’m in a position where I feel like I’ve been playing some great golf to go into the week and try to lock up my spot automatically.’

The 45-year-old has had a turbulent relationship with the Surrey course throughout his playing career but his luck changed last year when he finished fifth, bettering his previous best finish of joint 10th.

‘My record at Wentworth is a love-hate relationship. I’ve done okay, I’ve also missed quite a few cuts. But over the last five years I’ve started to come round to Wentworth.

‘I’m looking to put myself right up on that leaderboard and see if I can finally win one.’

Poulter has rightfully earned the title of the Postman – he always delivers – for his Ryder Cup theatrics. He has featured in five winning European teams during six appearances, becoming a talisman for Team Europe. 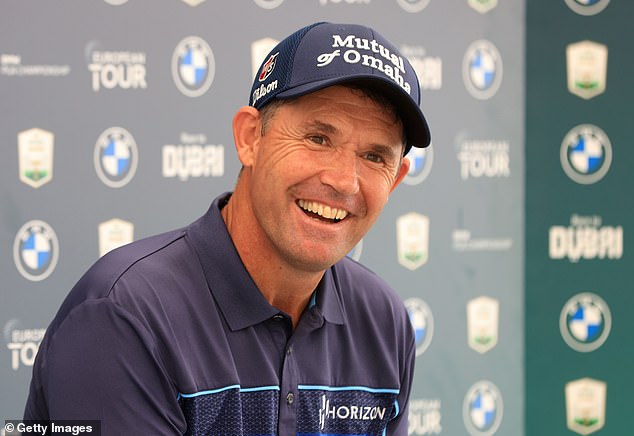 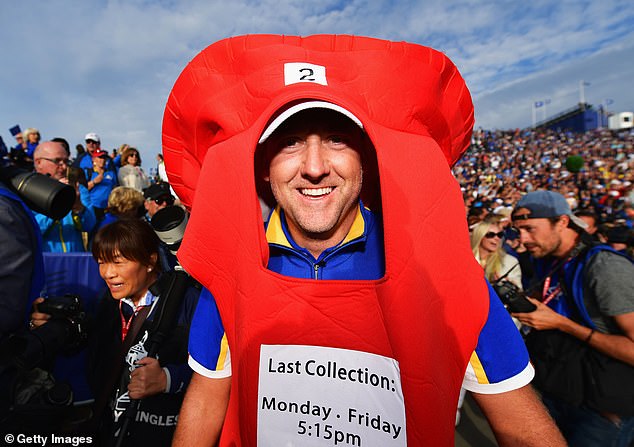 His passion for the Ryder Cup shines through in his epic displays and the Englishman is hoping he can take that unbridled enthusiasm to his seventh appearance.

‘It would mean a lot. The team environment at the Ryder Cup and the special bond you get has always meant a lot to me,’ he said.

‘If I’m able to play my seventh… I’m getting old, is what that really means more than anything else,’ he jokingly added.

‘I would be a senior member of that team, someone that’s got some experience.

‘And if I’m able to do that and reassure a couple of rookies, then I’ll be able to go out there and give Paddy my full support.’

Although Harrington’s team could look different come next Monday, Poulter believes Team Europe is already shaping up into a side that ‘has what it takes’.

‘On paper, for many of the Ryder Cups that I’ve played, we go in as underdogs because the Team USA’s world rankings as a whole are less than Team Europe’s.

‘But as we know “on paper” doesn’t always work out that way. I feel confident that we have a strong team and I believe Team Europe has what it takes.

‘If you look at the team today, we have two rookies on the team that are in position.

‘Shane [Lowry], an Open Championship winner. Shane is not a rookie. He’s played on the big stage now for so many years. He is not going to get a surprise. 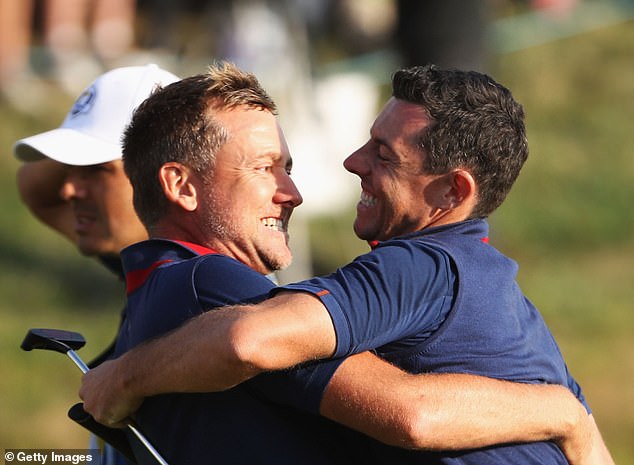 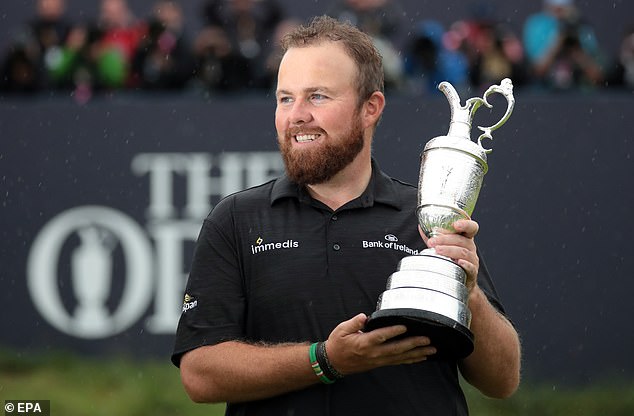 ‘If you hold that Claret Jug, you’re more than experienced enough to be able to stand on the first tee at the Ryder Cup.

‘Yes, it will feel different. Yes, you’re going to get a hell of a buzz. But Shane would be an amazing asset to that team.

‘Viktor Hovland is somebody who’s super young, extremely good, and someone that really is going to be a member of Ryder Cup Team Europe for many, many, many years to come.

‘Then everyone else has played a Ryder Cup. If you look at the names that are in that team, world No 1 Jon Rahm and Rory McIlroy, that team is pretty stacked with experience.’ 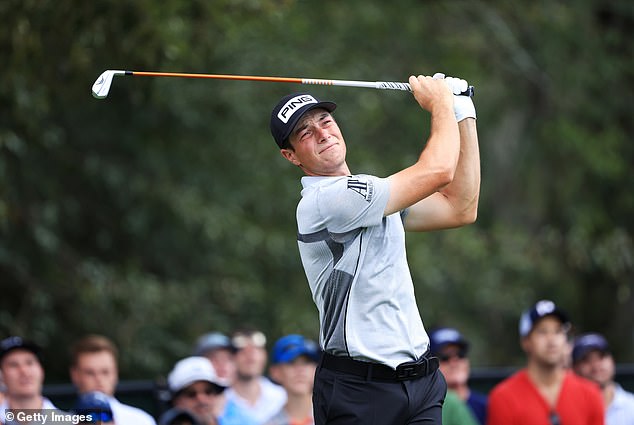 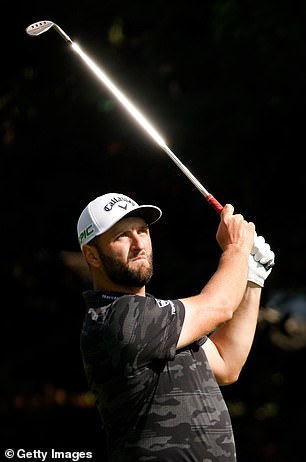 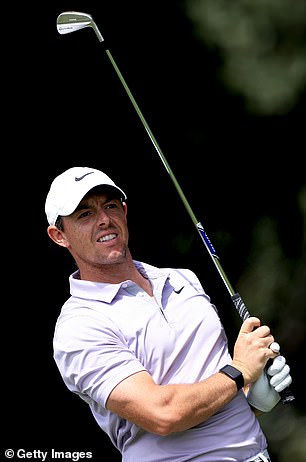 Poulter has played with eight different partners across the foursomes and fourballs and has nine wins in the pairings matches.

And, while he would be happy to pair up with any of his European team-mates this year, he is excited at the prospect of teaming up with hot-shot Hovland. 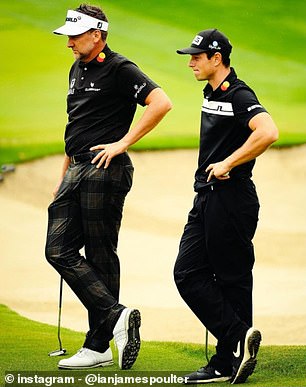 Hovland and Poulter sent tongues wagging earlier this year when the Norwegian underlined his Ryder Cup credentials in the company of Poulter at the Saudi International.

After the duo became acquainted on the desert swing, many believed they would make a formidable pairing against the Americans this September – and Poulter agreed.

‘I’m an extremely adaptable player in the Ryder Cup. I have played with a whole host of different types of players and had a lot of success in that format. Viktor Hovland is a guy who I could easily be paired with,’ he said.

‘The short answer would be: yes, if I’m in the team I would definitely be excited about playing with Viktor Hovland.’

Europe have often been underdogs heading into the biennial tournament in terms of world rankings and this year is no different with eight US players occupying places in the top 10.

But Team Europe have famously battled back, most notably in 2012’s ‘Miracle of Medinah’. 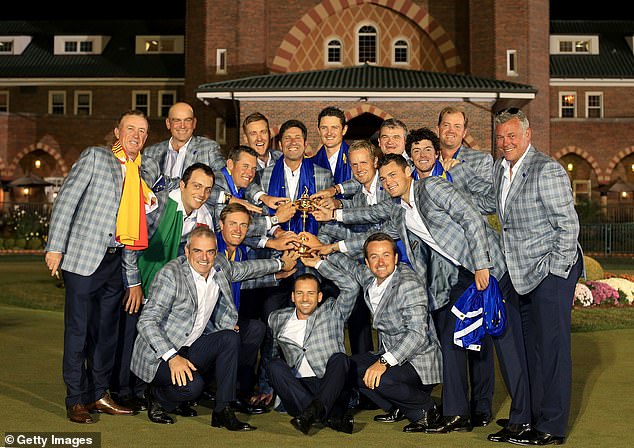 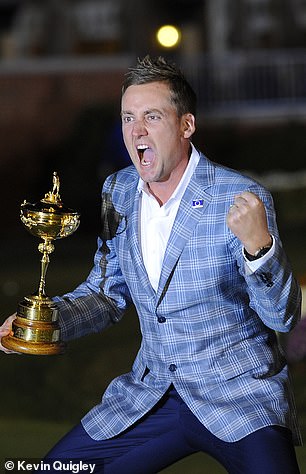 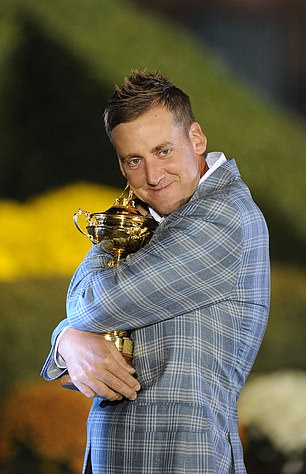 Poulter believes it is Europe’s unique bond and strong relationship that rallies them to victory against the odds.

It is something that will undoubtedly be highlighted this year against the contrast of a slightly warring and fractious US team.

Bryson DeChambeau and Brooks Koepka’s feud has dominated headlines in recent weeks and, although they have called a truce at the behest of skipper Steve Stricker, the tension within the team is set to cause the US captain a few headaches. 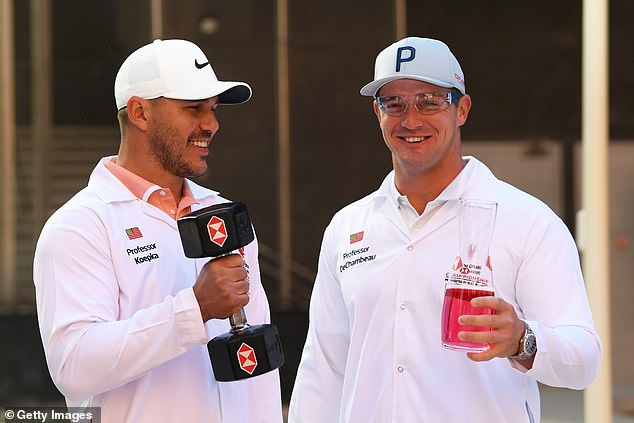 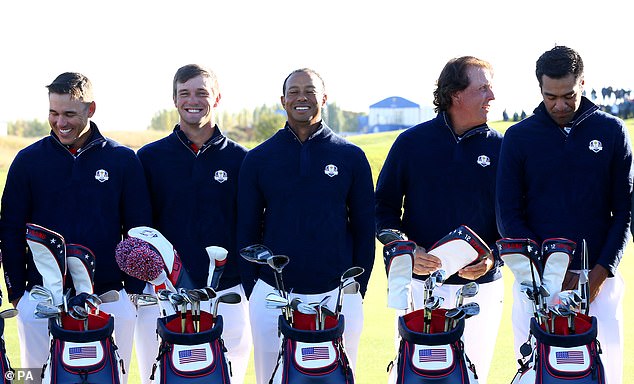 However, Poulter is not concerning himself with the spats from over the Atlantic, claiming they are ‘not his issue’.

‘I’ll talk about our dynamic on the Europe team and I’ll leave that team to themselves,’ he said.

‘I really don’t know how their team-room situation works. It’s really difficult for me to comment on how that dynamic is going to work for them.

‘I can only talk about our team room and how we all collectively get on – and we get on very well. 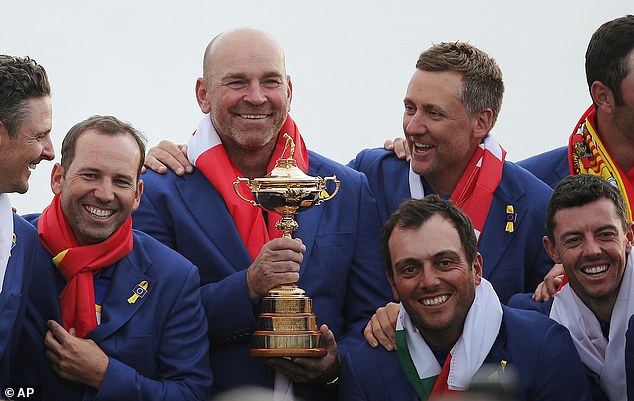 Team Europe’s close friendships have led them to victory in the past, including Paris in 2018 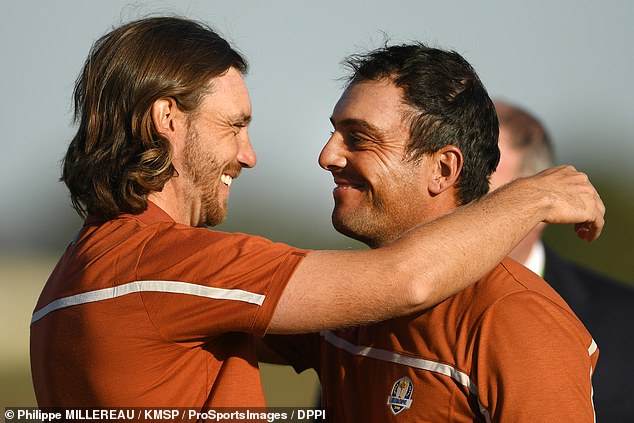 ‘That’s always been something that Europe has been very strong on. We have a lot of fun.

‘You make friendships during the Ryder Cup week that last a lifetime. That’s how well we get on as Team Europe.

‘However they get on in that team, it is up to them. That’s not my issue.’ 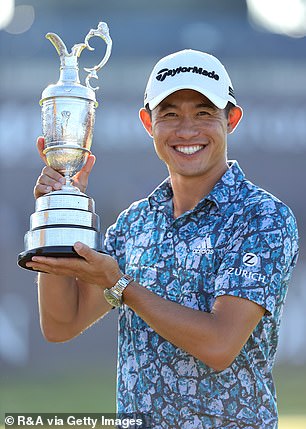 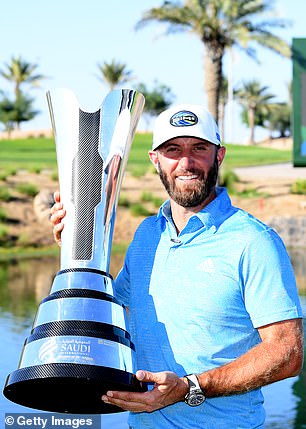 Despite the array of talent bolstering the American ranks, Poulter claims he is prepared to face any member of that team to deliver a point for Europe in Sunday’s singles matches.

‘I 100 per cent don’t mind whoever it is,’ he said. ‘Whoever is on that team is a great player. The US team is extremely strong.

‘Whatever pairings come out on Sunday you have one job to do and that job is to go and secure your point. It doesn’t really matter who you play. You just have to play better than whoever you are playing.’

In recent Ryder Cups, European fans have created memorable first tee moments turning the grandstands into a wall of sound and their rowdy chants of ‘ole, ole, ole’ creating an ‘incredible buzz’.

‘That first tee? It’s what you work hard for,’ said Poulter. ‘All of your golfing experience pulls itself together for the fun and the enjoyment that you get out of walking on to that first tee. 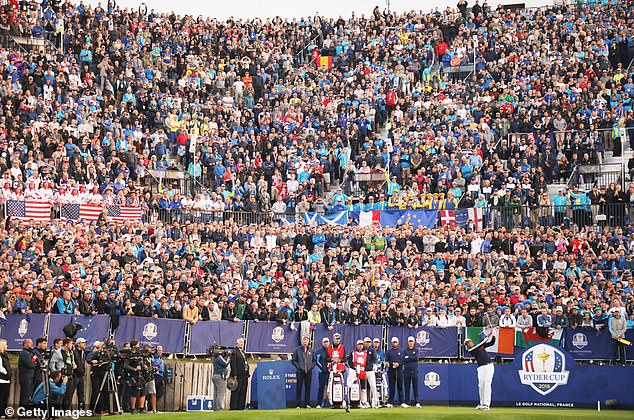 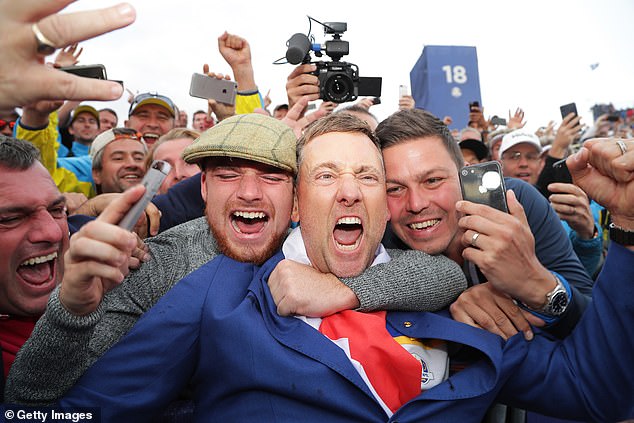 ‘At first, the nerves don’t go away. Whether you’re 45 or 25, you’ll experience the same thing. And it’s just an absolutely incredible buzz.’

2021 has seen spectators welcomed back to the course following the eerie quiet of lockdown tournaments.

But the current ban on travellers from the EU and the UK entering the US has led to concerns that the lack of Europeans will magnify the American home soil advantage.

The Postman believes Team Europe fans will still deliver with their voices ringing out across the fairways of Whistling Straits even in their few.

‘I don’t know how many European tickets sold, I’m not sure how many expats have put themselves in a position to pick up those tickets, and I’m not sure if our hardcore fans are able to break the system,’ said Poulter. 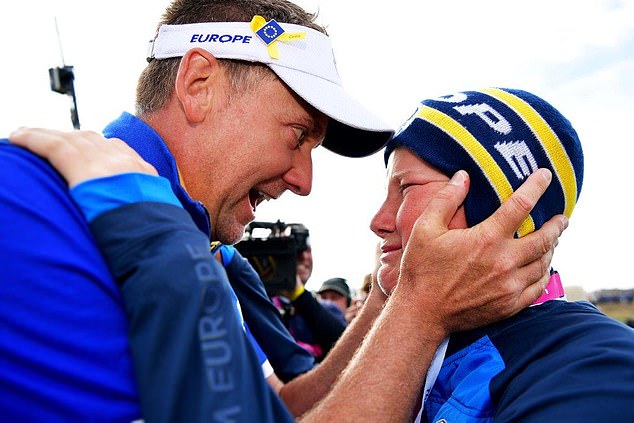 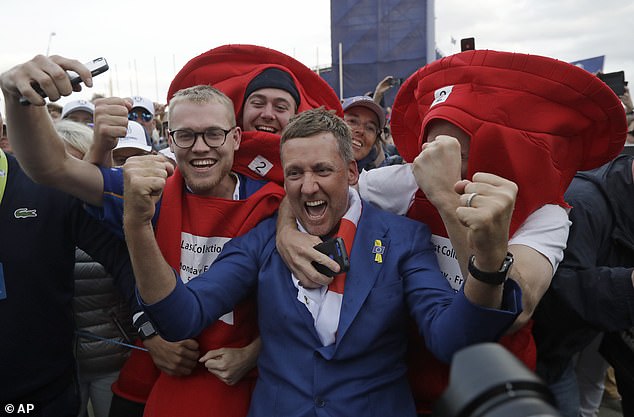 ‘We don’t know yet what the breakdown is going to be. But it’s amazing to have full fans back.

‘Obviously, that wouldn’t have been the case last year. So, the right thing to do was to postpone it for a year, to pack the stand.

‘We all know what our European fans are like. I’m sure the sing-songs and all of the chants are going to be there. And it’ll be an amazing experience.’

Ian Poulter is a proud global ambassador for DP World, a leading enabler of global trade and long-term European Tour partner committed to helping its customers move goods around the world in ways that are smarter, faster, safer, and more cost-efficient. Find out more at dpworld.com.