If it was a Facebook status, it would most likely be listed as complicated.

There are ups, and plenty of downs. Money issues. Time away from home, heaps of time away from home. Hotel rooms. Time zones you may never have heard of. Flights that are delayed, even cancelled. Friday afternoon pressure trying to secure a cheque, just as the rest of society heads to the pub.

That’s golf, and that’s the lot of a professional golfer.

Dale Brandt-Richards hadn’t played for four months last year, as COVID shut down the world, when he realised his relationship with the sport he had dedicated almost his entire adult life to was on the rocks, while he was standing on them.

“I was out fishing with one of my mates in the middle of the day at Narrabeen,” says Brandt-Richards, who had four top-10 finishes on the Australasian tour in the two years before COVID. 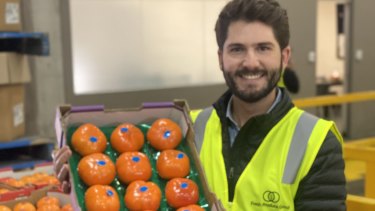 “It was a matter of just taking a job, ask questions later.”

The job was driving diesel fuel all around Sydney, which was on the back of some landscaping work for a friend, before landing himself current employment as a fresh produce export manager at the fruit markets.

He hasn’t played a professional golf tournament since the Victorian Open at the start of 2020, one of the last before the pandemic took hold in Australia. He has no plans to return.

For the record, Brandt-Richards said his partner’s cancer diagnosis and other life factors made his decision easier.

But he’s not alone in his frustration with the sport and lack of opportunity for veteran professionals in Australia since COVID struck, despite surging participation rates in states like NSW, where public courses have remained open.

“Golf courses have been making more money than they ever, ever have and we couldn’t play golf? There wasn’t enough to hold Pro-Ams? Some went ahead and we’ve had a few invitationals,” Brandt-Richards says.

“I used to joke when I first started I’ll go to an opening of an envelope. As long as it had money in it and could be opened, I’d go to it. The participation side has been booming, but on the professional playing side there has been nothing.”

As Australia’s domestic scene slowly wakes from its COVID slumber – the Australian PGA in January will be the biggest event held in two years – a cohort of hardened Australian professionals have walked away from the game, or are on the verge of doing so.

It’s been a golden year in some respects for the sport in Australia, with young guns Cameron Davis and Lucas Herbert securing their maiden PGA Tour victories, Min Woo Lee winning the Scottish Open and sitting on the cusp of the world’s top 50, his sister Minjee Lee claiming her first women’s major and Hannah Green banking a “life-changing” $US1 million bonus on the LPGA Tour. 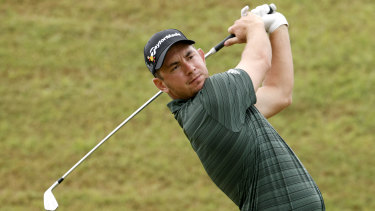 Lucas Herbert had a breakthrough win on the PGA Tour this year.Credit:Getty

But there are just as many stories of others being unable to keep going as the country opens back up.

The men’s Australian Open – which relies heavily on the country’s US and European Tour regulars returning home mixed with a sprinkling of international star power – has been cancelled for the past two years.

In October, Golf Australia announced this year’s event at The Australian was abandoned because of travel and quarantine restrictions. The next day, NSW Premier Dominic Perrottet announced 14-day isolation for vaccinated travellers from overseas would be scrapped within a fortnight.

Apart from a rush of events at the beginning of this year before Sydney’s Delta variant outbreak – including Braith Anasta’s TPS Sydney, the Queensland Open and NSW Open – Australia’s professional golfing calendar has been stifled in 2021.

‘I think there’s been a big devaluation of what it means to be a professional golfer in Australia. We’re seen as a second rate sport.’

“Some of my best mates I spent 12 years travelling on the road with, they haven’t played a golf tournament for 18 months,” says former professional Callan O’Reilly, who has given up touring to become a real estate agent in Newcastle.

“In my last couple of years I was vocal about what I thought was a little lack of respect to guys who play in Australia. I think there’s been a big devaluation of what it means to be a professional golfer in Australia. We’re seen as a second rate sport.

“But the calibre of player in this country is massive. Per capita, how we perform [overseas and domestically against visiting golfers] is incredible. Maybe this has shown participation will still boom without professional golf in Australia.”

O’Reilly, who reached a career high of 447 in the world, is content with his call, albeit one he described as “massive”. He had partial status on the Japanese tour when COVID gripped the world – he flew back to Australia one day before hotel quarantine was mandated – and has used his time away from golf to buy his first home. He’s also preparing to become a father. 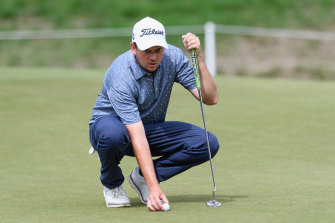 Callan O’Reilly at the New Zealand Open in 2018.Credit:Getty

“I spent 10 years as a travelling golfer and then all of a sudden life changed,” O’Reilly says. “There were times where I had maxed out the credit card and you’re thinking, ‘how am I getting to the next one? Can I get to another state?’ But I was lucky I had plenty of support at home.

“I used to check the tracking website for COVID cases every day [in the first few weeks of the pandemic] and I thought, ‘we’re not going back out this year’. And I basically went out to find a job.

“This is now the 30-year career. Towards the end, golf … it became tough for it to be fun.”

To have their concerns about the state of the local game heard, more than 50 players have joined an advisory group called the Oceania Golf Players Association, which is headed by veteran players representative Joseph Sponholz.

He’s worked on collective bargaining agreements in the NBA and NFL, while women’s major champion Green is aligned with the movement and last month spoke about players wanting to have their voice heard.

But how many tournaments in Australia are sustainable?

“The economics of tournament golf in Australia is not a pretty sight,” Golf Australia chief executive James Sutherland said. “I think there are people who have unrealistic expectations around the possibility.

“We can’t be in the business of putting on events that lose money that also aren’t embraced by fans. We’ve all got a role to play in that. That’s not saying I don’t have empathy for touring professionals that have had a really challenging time, we’ve all had a challenging time during the COVID period. If we thought we could have put these events on, made them work and wash their face, then we would have.

“But we can’t be in the business of losing money because every dollar we lose on a tournament is one dollar less we can put into growing the game in a participation sense.”

The OGPA insists it wants to work with the PGA of Australia, a sentiment echoed by veteran Australian professional Steven Jeffress, who says he will severely limit his playing schedule as he turns to life as an NDIS support worker for dementia patients.

“The reason I went onto [the OGPA] was for the young players,” says Jeffress, the winner of the 2014 Fiji International. “I just want them to have a voice. I’ve definitely moved in a different direction [with my own life].

“I could give up golf and make more money each week working than playing golf. At some stage it becomes a bit of a business decision and you think, ‘what the hell am I doing?’”