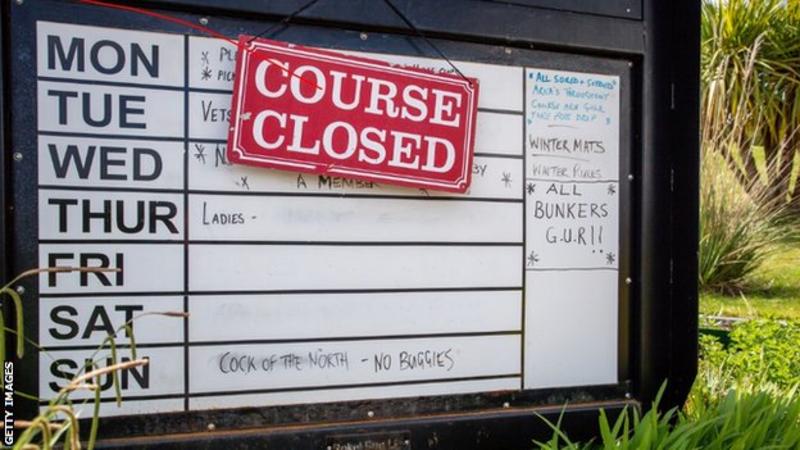 Golf is one of sport’s more traditional pursuits, but as courses in England ready themselves for resumption it will return as a somewhat different game, albeit perhaps better co-ordinated and with potential to grow in popularity.

Governing bodies worked closely to formulate protocols to make golf safe amid coronavirus restrictions and insiders welcome the government’s relaxation of restrictions, especially after one of the wettest winters on record caused widespread course closures.

For many areas of the golf industry, problems remain. While recreational play revives, overheads have to be covered with limited revenue streams, and professional golf still faces an uncertain future.

But golf is a game that lends itself to social distancing and this means amateur hackers can reacquaint themselves with their clubs and courses as early as this Wednesday, albeit not in Scotland, Wales and Northern Ireland – where different restrictions apply.

Here’s how golf will differ while the battle against Covid-19 continues:

Most venues will insist on tee times being pre-booked and players will need to arrive shortly before they start, and leave as soon as rounds are completed.

Clubs will be encouraging social matchplay rather than strokeplay competitions, and the usual practice of swapping scorecards is not allowed.

No touching the flag

When the updated 2019 version of the rules was published, provision was made for golfers to be able to putt with the flag still in the hole.

This was brought in to help speed up play, but it is now an essential component of the game.

No-one should be allowed to touch the flagstick to help prevent transmission of the virus. Putting into an empty cup is no longer an option.

Smooth sand with your feet

Rakes located to smooth footprints in bunkers pose another risk and will be removed from courses.

The onus will be on players to smooth over the sand with their feet, but some clubs will also allow placing the ball onto a better lie to eliminate the injustice of landing in the dents left by someone else’s size nines.

The eternal problem for all golfers is the ball refusing to drop into the hole.

This now becomes the absolute norm, even for the best putts, because courses will need to use hole-filling devices (such as a piece of foam) that prevent holed putts from dropping beneath the surface of the green.

This makes it easier to pick up the ball without touching any other surface.

Your ball will get dirty

That is a fact of life in these times.

Ball washers, usually located next to teeing grounds, are to be taken out of use. The same applies to benches and seats dotted around courses, which now become a form of out of bounds.

And – traditionalists look away – changing in the car park is OK.

Many golf clubs are affronted by the thought a player would change their shoes anywhere other than in the locker room. But these facilities, including clubhouses, will remain shut even when courses are open.

That means changing into your spikes in the car park is not only all right, it is actively encouraged.

All greenkeepers must work within social distancing protocols and many clubs are splitting teams into pods to try to ensure a Covid-19 outbreak does not affect an entire greens staff.

Putting surfaces must be regularly mown otherwise they are lost forever. Some course managers and staff are being schooled on how to operate mowers in case greenkeeping staff become infected.

There is a co-ordinated approach

The current emergency has prompted an unprecedented coming together of golf authorities.

Organisations such as the Professional Golfers’ Association, England Golf, the R&A, the Golf Course Managers’ Association and the body representing British and international greenkeepers have united to promote golf’s cause.

Uniform safety measures have been thrashed out by these entities.

“The big thing is they are noticeably working together,” said one club manager. “The level of communication has been very good.

“I wonder if this could be a big opportunity for golf because there are lots of other things you still can’t do in society.”

Although golfers will be playing again, economic challenges remain.

With clubhouses and professional shops shut, additional revenue streams will be curtailed. Clubs will prioritise their members and the number of starting slots will be limited by smaller playing groups and spaced-out tee times.

Clubs will need employees to prepare courses for play but with limited revenue in return.

Some pay-and-play facilities may see a boost in interest, with golf one of the few sports that can be played at the moment.

When will we see the professionals in action?

The Korean LPGA resumes behind closed doors this week. Three of the top 10 players in the women’s world rankings – Sung Hyun Park, Sei Young Kim and Jeongeun Lee6 – are scheduled to compete in the KLPGA Championship at Lakewood Country Club in Yangju.

On Sunday, Rory McIlroy partners Dustin Johnson against Rickie Fowler and Matthew Wolff in a televised charity match at Seminole in Florida.

The PGA Tour is due to resume in Texas on June 11, with at least the first four events to be played without spectators. The European Tour hope to resume later in the summer.

There are strong rumours the British Masters will start a week earlier than scheduled on 23 July and mark the start of four tournaments in a row to be held in Britain.

Can play resume on the course where Masters winner Ian Woosnam learned the game?

It is located between Welshpool and Shrewsbury, straddling the Wales/England border.

The fourth green is in England, as are the fifth and sixth holes – but the rest of the course is in Wales, where golf is still banned.