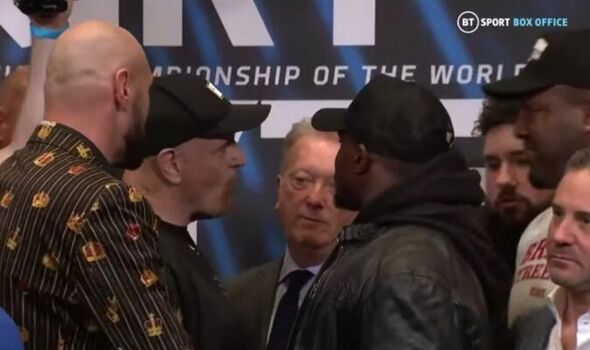 Tyson Fury and Dillian Whyte surprisingly played the peacemakers as the two fighters kept their emotions in check to prevent a brawl between their teams on stage at their press conference. The heavyweight titans, who go to war in front of a record-breaking 94,000 spectators at Wembley Stadium on Saturday night, surprised everyone with their mutual respect for one another and there was no bad blood between the two rivals.

However, as Fury and Whyte went to face off on stage, there was a confrontation between both teams as John Fury and Dean Whyte exchanged words.

The situation then threatened to escalate before Fury, Whyte and Frank Warren managed to diffuse the situation.

Both fighters ordered their teams to get back, allowing the face-off to take place.

The Gypsy King later detailed his role in “preventing a big ruckus,” he said: “Listen, it’s going to be a good fight.

“I just prevented a big ruckus on stage. People want a big ruckus at press conferences, they want to see all this screaming, shouting and punching but let the two boxers do a fight and enjoy it.

“It’s not for entourages to get involved. I had to be professional and say ‘let’s step back, let me and him do what we’ve got to do and that’s it.’

“We’re here to fight, the man’s here to do what’s he’s getting paid to do and so am I. Let him do his job.”

Meanwhile, Whyte seemed to blame Fury’s father John for the unnecessary coming together…

“My man’s 600 years old and he’s stepping forward and they’re not letting my guys onto the stage.

“I said to him, John, calm down, you’re an adult and you keep shouting and screaming like a child.

“It’s me and Tyson’s day, stop getting involved, it’s your son’s day.

“He was trying to get in front of his son so I said ‘you’re an old man, take it easy.'”

Whyte missed the public workout on Tuesday due to a ‘late flight’ following his arrival in the UK from his home in Vilamoura, Portugal.

The Body Snatcher landed at Luton Airport with his entourage on Tuesday ahead of the biggest fight of his career.

Fury and Whyte will come face-to-face for one last time on Saturday at the weigh-in which takes place at BOXPARK, Wembley.