The fight will take place Saturday (Sunday AEST) – on the evening of September 11 – and Trump’s son Donald jnr will also provide live commentary for the pay-per-view event. 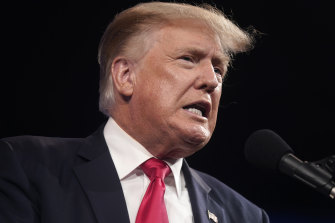 Former US President Donald Trump has a long history with combat sports.Credit:AP

“I love great fighters and great fights,” Trump said in a statement. “I look forward to seeing both this Saturday night and sharing my thoughts ringside. You won’t want to miss this special event.”

Holyfield, 58, is taking on 44-year-old former UFC light heavyweight champion Vitor Belfort in the main event of a card assembled by Triller Fight Club. It will be staged at the Seminole Hard Rock Hotel and Casino in Florida.

Trump, 75, has a long history of involvement with combat sports. He was briefly a major player in the boxing world in the late 1980s and early 1990s, when he was able to stage a number of high-profile fights at his Atlantic City properties. Some of those fights featured Mike Tyson, including a 1988 win over former heavyweight champion Larry Holmes that became the only knockout loss of Holmes’s 75-fight career and, later that year, a 91-second destruction of lineal heavyweight champion Michael Spinks. After Tyson was shockingly upset in Tokyo by James “Buster” Douglas, the latter quickly lost his heavyweight crowns to Holyfield. Trump then staged a 1991 “Battle of the Ages” fight in Atlantic City between Holyfield and former champion George Foreman.

Holyfield won that match-up and made two more successful title defences before he lost to Riddick Bowe in 1992. Holyfield subsequently won and lost several more heavyweight title fights, including two victories over Tyson, in a professional career that began in 1984 and appeared to finally end in 2011. In his return this year to the ring, Holyfield was reportedly in talks to square off again with Tyson, who made his own comeback last year in an exhibition with Roy Jones. That trilogy fight never materialised and Holyfield moved on to a planned fight with 48-year-old Irishman Kevin McBride, whose career highlight came in a 2005 defeat of Tyson in Washington DC. 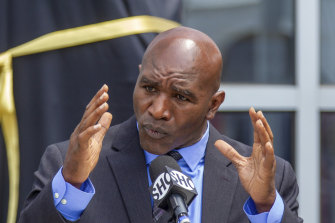 The 59-year-old Evander Holyfield has not fought in a decade.Credit:Atlanta Journal-Constitution

McBride’s match-up with Holyfield never got off the ground, though, leaving the latter available to replace Oscar De La Hoya, a 48-year-old former multi-division champion who was scheduled to emerge from retirement and face Belfort on Saturday. De La Hoya announced last week that he would not be able to fight this weekend because he was dealing with a case of COVID-19. He was set to face Belfort at Staples Center in Los Angeles, but once De La Hoya was replaced by Holyfield – whose participation reportedly failed to get sanctioning approval from the California State Athletic Commission – the card was moved to Florida.

Trump and his son will provide alternative commentary on the fight, which will be called by longtime HBO announcer Jim Lampley alongside analyst and former welterweight champion Shawn Porter. A spokesperson for Trump did not immediately respond to a question about what else the former president might have on his agenda for Saturday, which will mark the 20th anniversary of the terrorist attacks that shook the country and much of the world.

Saturday’s undercard will include a boxing match between former UFC champions Tito Ortiz and Anderson Silva. Ortiz, 46, is familiar with Belfort, having defeated him at UFC 51 in 2005, and he worked with Trump – or as the show would have it, for Trump – during the 2008 season of Celebrity Apprentice.

More recently, Ortiz has engaged in politics as a Republican and an outspoken supporter of the former president. He gained the acting mayor position last year in Huntington Beach, California, after campaigning for the city council with the slogan, “Make Huntington Beach safe again.” Ortiz has also been a staunch opponent of mask-wearing during the pandemic, reportedly described the coronavirus as “population control by the left” and, as with Trump, referred to it as “the Chinese virus.” Ortiz resigned from the city council in June, declaring that “this job isn’t working for me” and suggesting his political efforts had put in jeopardy his family’s safety.

On Tuesday, Ortiz shared on Instagram a promotional image for the Holyfield-Belfort card and wrote, “Making Boxing Great Again!”

Trump also has a long association with MMA, and he is on friendly terms with UFC chief Dana White. Trump was in attendance at a UFC event in 2019, and after leaving office he made an appearance in July at UFC 264, which was held in Las Vegas and featured Dustin Poirier defeating Conor McGregor.