George Kambosos jnr hasn’t even stepped into the ring yet, but already his world title fight is worthy of a book or a movie.

The build-up to the Australian’s showdown with WBA, IBF and WBO champion Teofimo Lopez has been stranger than fiction. Like the five contracts that have been tabled to him to date, some with his name misspelled. Or the multiple date and venue changes, for reasons as varied as Lopez contracting COVID-19 or a scheduling clash with a Monday night NFL game. And then there’s the Triller debacle, where the initial purse-bid winner was forced to relinquish their hosting rights after they couldn’t lock a date in.

If there is even half as much drama once they start throwing punches, this will be a fight for the ages.

“The way I see this book or this movie, we’re in the middle ground right now,” Kambosos jnr said of his story.

“The most important thing you are going to see in this movie is the hard work and dedication, and how when all the success comes, [the hero] never loses himself or forgets he got there the hard way.”

Whether Kambosos jnr’s story has a Hollywood ending will be determined at New York’s Hulu Theatre on November 28. But already, it is some tale. It’s a yarn about the fat kid everybody picked on at school who dreamed of playing in the NRL, but was always picked last for sporting teams. 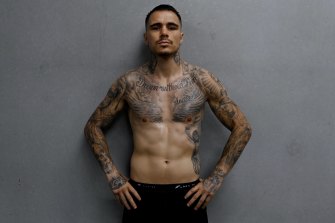 It was a tale of woe until, at about the age of 10, the protagonist fell into boxing. That’s when everything changed.

“That fuelled the fire, still to this day,” Kambosos jnr said. “When you’re a young kid and you’re bullied, you’re picked last and you’re overweight, no one even wants to look at you and you’re always pushed to the side.

“It creates a burning desire inside of you, a fire where you never want to go back there.

“Mentally inside you somewhere, you have that threat where you have to make this happen, you have to go the extra miles and put in because you don’t want to go back there.

“This will be the all-time greatest victory in Australian boxing.”

“It’s served me well, it’s built character, as hard as it was in those early years. Being bullied and overweight has given me the right character and made me the person I am today.

“It’s crazy, people see me now and think ‘what a confident guy, what an elite athlete, what an alpha male’ or whatever they want to say.

“It wasn’t like that back then. I was a very shy and reserved kid. It’s all part of my story and my destiny.”

When Kambosos jnr used boxing to get himself into shape, he was ready to make his mark in the sporting arena. However, he had to decide which one. 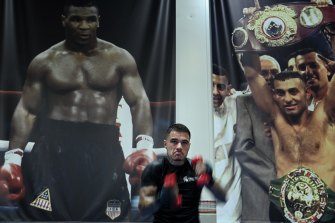 “Rugby league was my love at first,” he said. “That’s what I wanted to be, an NRL player.”

That goal appeared within reach when he was selected to join the Cronulla Sharks’ development squad. But on his first day, when then-coach Ricky Stuart was addressing the young hopefuls, Kambosos jnr’s mind drifted elsewhere.

“I wanted to be a fighter and the dates clashed with my boxing training.

“My father gave me a couple of days to make the decision and on the Monday I was going to tell him if I wanted to take the boxing bag or the footy bag.

“He rocked up from work and I had my boxing bag. I was ‘OK, let’s see how far this boxing game can take me’.”

Next week it will take him all the way to the Big Apple, for a crack at the undisputed world champion. Lopez is a superstar of the sport, a brash American predicting a knockout victory in the opening round.

However, Kambosos jnr has other ideas.

“He’s talking about one round, he wants that because he knows he hasn’t put in the right preparation,” he said.

“I’m ready to go 12 rounds. I would even ask the IBF commission to go old school, to go 15 rounds if they wanted to do that, because that’s the kind of fighter I am. I’m ready and will win by any means necessary.

“I see the holes, I see his mistakes. I believe he is going to run into some big shots. Don’t be surprised if I take him out early. 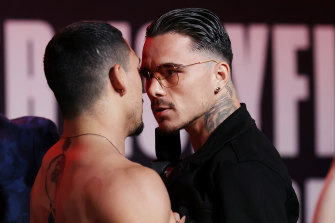 Teofimo Lopez and George Kambosos jnr face off during a press conference in April.Credit:Getty

“If not, I will be there for 12 rounds of breaking him down and totally destroying him and outclassing him.”

Regardless of the result, Kambosos jnr will be paid more than $2 million for the Lopez fight. It is a huge payday, but the man dubbed “Ferocious” is no overnight success. His first professional fights were held in front of a handful of fans on the club circuit. In those early days, he would have to sell tickets himself or even pay his opponent.

“Just to walk into the arena, the smell of the pokie machines and the bistros, that’s as real as it gets,” he said. “To come from there, I took a lot of risks.

“I’ve taken my boxing bag, my gloves, my big heart and my big balls and went to the US, the UK and the Philippines, all of these different countries to make it happen. We’re here now.”

His is one of the best stories in Australian sport, yet the mainstream media has, for the most part, snubbed Kambosos jnr. The 28-year-old hasn’t commanded the headlines like Tim Tszyu, Justis Huni or even Paul Gallen. However, he can achieve something none of them have in a week’s time.

“I don’t get frustrated any more because I’m fighting for the undisputed championship,” he said.

“The fans are puzzled why I don’t get the mainstream media, sometimes I’m puzzled by it.

“I don’t have a famous name, I didn’t come out of the Olympics or have an amateur pedigree.

“Maybe it’s because I’m not directly signed with a promoter in Australia, I’m not signed to Main Event or Fox Sports.

“I don’t let it get to me too much, I just stay focused on what I have to do.

“This will be the all-time greatest victory in Australian boxing.”

Whether Kambosos jnr’s story warrants a book or film deal will depend on what happens next. Regardless, the undefeated Sydney slugger knows the next chapter is the one that counts.

“That book couldn’t be complete until I have all of those beautiful belts around my waist,” he said.

“All the marbles, they’re coming back home to Australia, that’s the complete book.

“The story couldn’t be written any other way.”