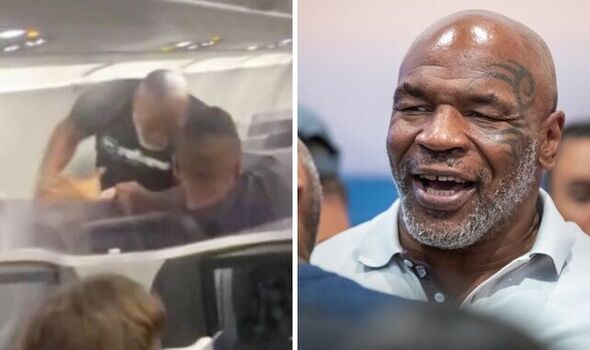 Mike Tyson has given celebrities a short and unexpected piece of advice on how to deal with wild fans. Tyson’s comment comes after a TMZ video showed him punching a passenger on a flight in April.

The rabid fan ended up eating a few of ‘Iron Mike’s’ signature right hooks after he had reportedly thrown a water bottle at the former heavyweight champion. Tyson admitted he was “high and pissed off” when the incident took place, but it hasn’t deterred him from flying commercial again.

“Do you worry about who is going to be sat behind you?” one TMZ videographer asked Tyson after he got out of a car on his way to catching a flight. “No way,” Tyson responded. He then went on to plug his weed brand, Tyson 2.0 and said “that’s what I’m about now, man. I’m all about Tyson 2.0.”

Before exiting the paparazzi interview through a security door, the TMZ reporter asked him for any advice for celebrities on how to deal with overzealous fans. “Love them,” Tyson said.

Tyson retired from professional boxing in 2006 but stepped back in the ring to fight in an exhibition bout against Roy Jones Jr in 2020. After the fight, he stated that he wanted to continue fighting and is now reportedly in talks to secure a bout against YouTube star Jake Paul.

Joshua accused of no longer being ‘hungry’ before Usyk rematch

During a recent episode of Jimmy Kimmel Live, Tyson revealed: “Anything is possible, but it has got to happen this year. That could be very interesting. He is skilled enough and I will give it to him because he is winning.

“Even if he is fighting fighters that aren’t meant to be good enough, they should still be beating him, but they can’t. He is beating people that he shouldn’t really be beating so you have to give him credit. He is doing good, and he is doing things that are great for boxing. This guy has seven million people following him every time he fights.

“The champions of the world don’t have that many people following him so what he is doing for boxing is sensational. No one should be hating on him; what this kid is doing they should be following him. He is helping everybody get money so why are people mad at him?”

An excited Paul has since responded, tweeting a clip of the video with the caption: “Thank you to the great Mike Tyson for the respect and opportunity. This year we are making it happen.”