It has been confirmed that Anthony Joshua’s rematch against Oleksandr Usyk on August 20 will be shown live on Sky Sports Box Office.

The highly-anticipated bout will take place in Jeddah, Saudi Arabia, with Joshua looking to avenge his defeat to the Ukrainian at the Tottenham Hotspur Stadium last year.

It was only the second loss of the Brit’s professional career and saw him lose his WBA (Super), IBF and WBO heavyweight titles. 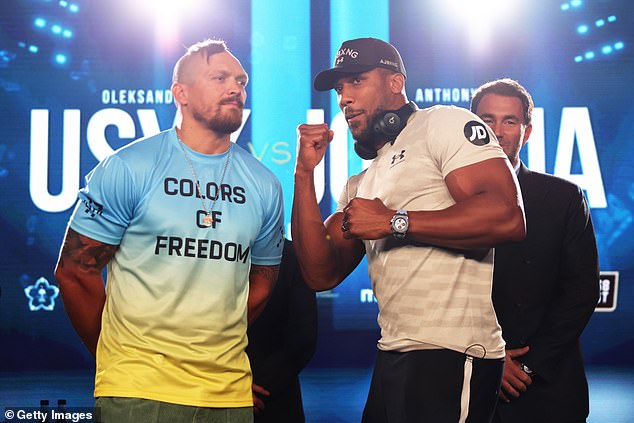 ‘Sky Sports viewers have enjoyed a long history with AJ, watching his every fight since he turned professional in 2013,’ the broadcaster’s head of boxing development Adam Smith said.

‘We also know Oleksandr Usyk very well, having had the last four of the Ukrainian’s fights exclusively live on Sky Sports.

‘This rematch is a massive occasion with everything on the line and so many questions to be answered. We can’t wait to bring it to boxing fans in the UK & Ireland in true Sky Sports fashion with all the build-up it deserves.’

Pay-per-view details have not yet been released for the fight, but fans should expect to pay a similar fee to the £24.95 that Sky charged for the original clash.

That made it one of the most expensive television events in British boxing history, with many viewers fuming at the price.

The fight will be Joshua’s last to be shown on Sky, as the 32-year-old has signed a deal with DAZN worth a staggering £100million-a-year.

The broadcaster will show all of his future fights, while the Watford-born boxer will become a global ambassador for DAZN as well as a special advisor to the group.

‘I am entering a new phase in my career with a new training environment, new coaches and now a new broadcaster,’ Joshua said last month.