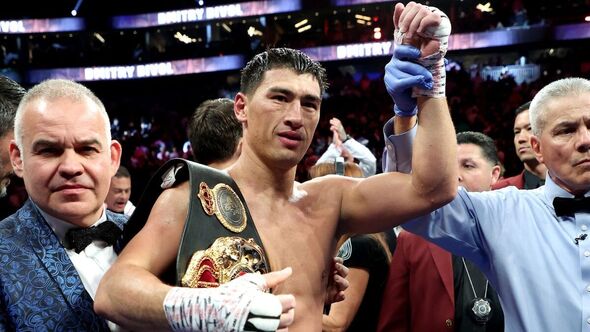 2022 was a year full of frustration for boxing fans. From the breakdown in negotiations between Tyson Fury and Anthony Joshua to the Conor Benn drugs testing debacle, many will be left exiting the year with a bitter taste in their mouth.

But there have been plenty of moments to remember as well. The last 12 months have brought us unforgettable nights, stunning knockouts and colossal upsets that will be remembered for years to come.

So, with that in mind, we here at Express Sport, are closing out 2022 on a positive note with our end-of-year boxing awards.

When it comes to great 2022s, you’ll be hard-pressed to find a fighter who had a better one than Dmitry Bivol. The WBA (super) light-heavyweight champion opened up his year with a sensational upset win over former pound-for-pound king Canelo Alvarez and closed it off by taking the undefeated record of Mexican hotshot Gilberto Ramirez.

Claressa Shields lived up to her self-proclaimed GWOAT status this year with two convincing victories over Savannah Marshall and Ema Kozin. The American went about avenging the only loss of her amateur and professional career against Marshall in a career-best showing to become the undisputed middleweight champion.

Knockout of the year: Leigh Wood vs Michael Conlan

Leigh Wood and Michael Conlan’s featherweight slugfest could have easily been crowned our fight of the year, but it was its conclusion that made it what it was. After being floored in the opener, Wood dusted himself off and brought the fight to Conlan. As both men threw hell to the wind in the final round, Wood landed a peach of a right hand on the top of Conlan’s head that sent the Irishman tumbling backwards and through the ropes – in a climax not even Sylvester Stallone could have thought up.

Dubois laughed at for getting ‘chinned’ as Joyce raises suspicions

Fight of the year: Katie Taylor vs Amanda Serrano

Katie Taylor and Amanda Serrano left the entirety of Madison Square Garden on its feet after their sensational undisputed lightweight title fight. Taylor won via a razor-close split decision but was badly hurt in the middle portions of the contest. Ultimately the volume swung in favour of Taylor while the more impactful shots were landed by Serrano with the judges favouring the former.

Upset of the year: Jai Opetaia vs Mairis Briedis

Long-standing cruiserweight No1 Mairis Briedis was dethroned in July by Aussie puncher Jai Opetaia much to the surprise of many. Coming into the contest, Briedis had looked unstoppable since sustaining the only loss of his professional career against former undisputed champion Oleksandr Usyk back in 2018. Meanwhile, Opetaia, although no doubt an impressive prospect, hadn’t fought anyone near the standard of the IBF champion. But that wouldn’t prove to be a hindrance to Opetaia who convincingly outboxed Briedis for 12 rounds to claim a unanimous decision victory.