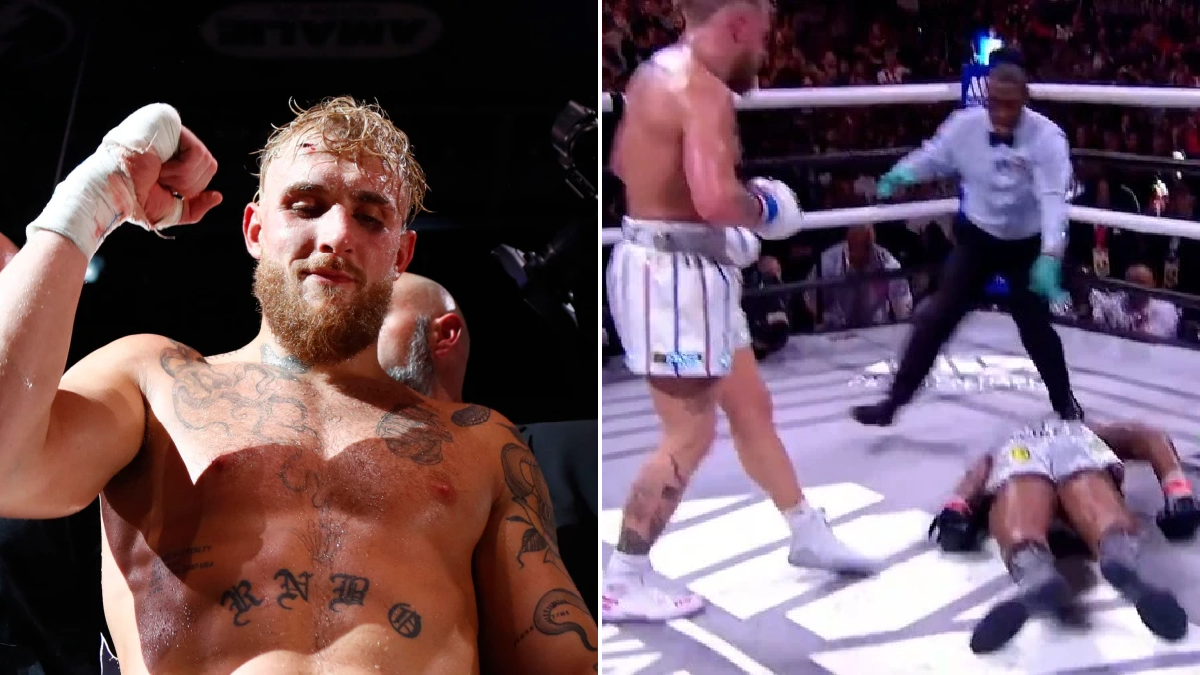 Jake Paul extended his unbeaten record against Tyron Woodley in Florida on Saturday night, but some boxing fans have claimed the fight was ‘rigged’.

Paul, 24, was set to fight Tyson Fury’s brother Tommy but the heavyweight pulled out of the bout earlier in the month due to illness and injury.

Woodley stepped in for Fury but suffered a brutal knockout defeat after being sent to the canvas in the sixth round.

Paul called it the ‘moment of his life’ as he extended his perfect record to five wins, but some fight fans were convinced the knockout was planned.

Boos rang out from the 20,000 crowd during five subdued rounds and Paul has been accused of making a ‘signal’ to trigger the knockout win in the sixth.

Moments before the knockout blow, Paul was seen twisting his hand – a feint tactic sometimes used by boxers – but some furious fans thought it was proof the fight was rigged.

Why he turn his glove like a door knob right before he threw the ko punch like that was the signal to take a dive tho ð¤ pic.twitter.com/5nfIYpimcz

These Jake Paul fights are rigged

Nice signal with your right wrist – he took the knock down right after. RIGGED pic.twitter.com/r2aEdM9mXn

He literally dropped his guard when Jake Paul was coming in. Come on man, no wonder why people donât give as much of a shit about boxing, itâs rigged to hell. https://t.co/CB0fsJyssu

Not that anyone didnât know but Jake Paul signaled his right hand to woodley and then hit the KO. So rigged.

After his win in Florida, Paul said: ‘This guy is a legend and respect to him for taking the fight with two weeks’ notice.

‘It was a tough fight. I had blood in my eyes. I had the job done. I was setting the punch up the whole fight. He didn’t see it coming. Like a lumberjack, timber. It’s got to be the moment of my life.

‘No-one in the history of boxing has done what I’ve done at this age. Massive pay-per-views, knocked out every single person that I’ve fought.

‘The only person that’s as active as me and doing as big pay-per-views is Canelo [Alvarez].

‘I’ve turned everyone I’ve fought into memes, going viral all over the internet. I’m ready to fight whoever – it doesn’t matter if they’re a professional boxer or a five-time UFC champion. I’m built for this.’