‘He started tensing up and shaking!’: Dillian’s brother Dean Whyte claims John Fury tried to FIGHT him to kick off a scuffle between the two camps during face off with Tyson Fury… as he hails the Gypsy King for stepping in to calm his dad down

Dillian Whyte’s brother Dean has claimed John Fury kicked off a ruckas at the Fury vs Whyte press conference by trying to fight him – as he praised his son Tyson for easing tensions at Wembley Stadium.

The pair finally went face to face for the first time ahead of Saturday’s showdown under the arch and a fiery meeting was expected given the dispute between the pair over the prize pot and contract disagreements.

But the exchanges between the two were largely respectful as a packed crowd gathered to hear from both fighters – although things threatened to spill over when Tyson’s dad John started shouting at members of Whyte’s team. 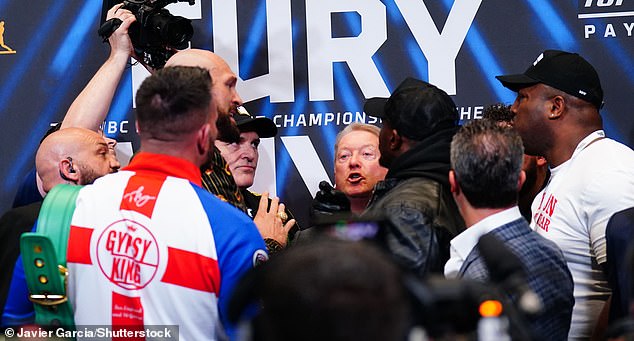 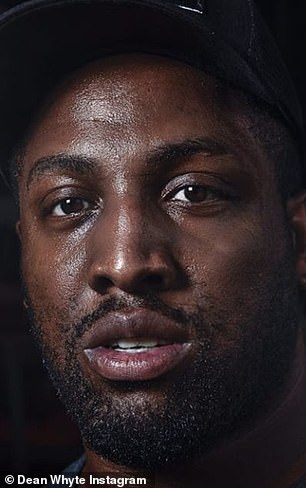 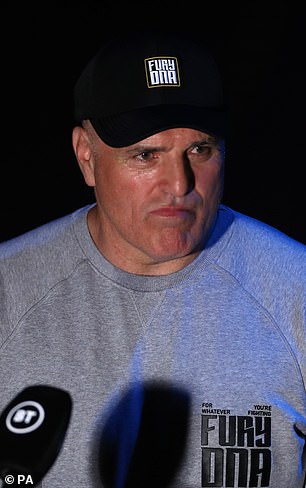 Whyte later called him ‘an idiot’ after he and Fury were forced to act as peacemakers to calm things down, and his brother Dean has now revealed the scuffle was started by John trying to start a fight with him.

‘John wanted to fight me!’ he told Sportsmail after the press conference. ‘I don’t know what was going on. He went mad. I said, “mate, what you doing? You’re an old man. Because you’re Tyson’s father I’m going to give you respect.” I said “Tyson talk to this guy”. Why are you tensing up? I’m a younger man. I said “behave yourself man, I’m not going to get into it.” He is the man’s dad. Im not interested in that.

‘He started tensing up, he was shaking and he was like “come on then”. Tyson said “chill out, what’s wrong with you” and I said “thank you very much”. I’ve always given him respect, he’s this man’s dad. I don’t know what you’re coming with today. 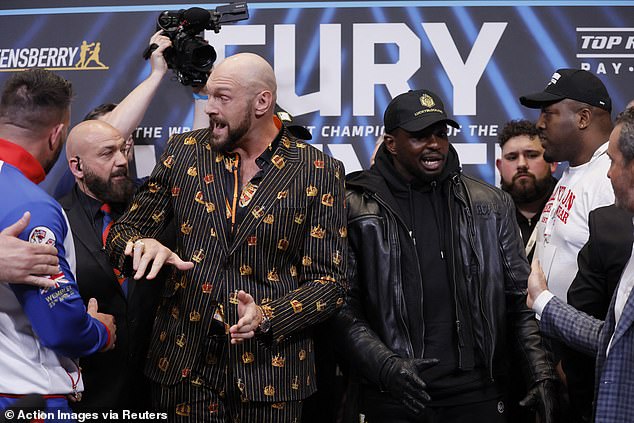 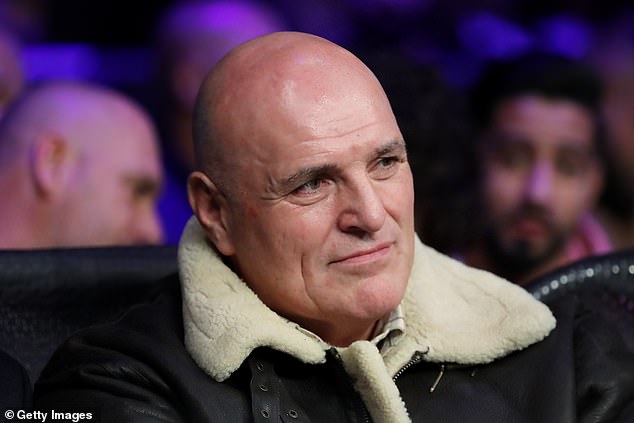 ‘Maybe he felt threatened and that he had to do that. Everyone was respectful so it didn’t make sense.

Dean said his team were gearing up for a heated press conference but we seeking a respectful encounter, saying that despite the feud between Whyte and Fury in the past, the respect had been ‘earned’.

‘We were prepared for that [for it to kick off], but we want respect. Respect is earned, I give Tyson that when I see him. They’ve both come through adversities. Once you changed it to disrespect, we’re not going to play that fiddle. I’m respectful until we’re disrespected. These guys have known each other for a very long time.’

Whyte’s head trainer Xavier Miller also had stern words for John Fury after the scuffle, claiming he was ‘born angry’. 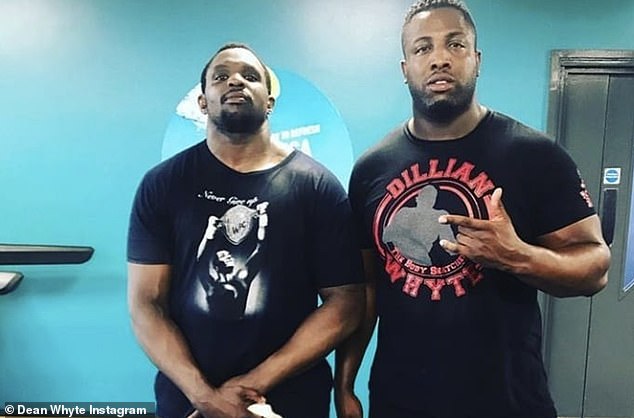 ‘The two fighters were fine, they were ready to go,’ he said. ‘We know who it was. That’s why you have your team ready to go just in case. The entourage are mostly light heavyweights anyway. The important thing is we get here and we perform.

‘John Fury can’t help himself. The man is just angry, maybe he was born angry.’

Dean – a prominent member of Whyte’s camp – spoke about some of the biggest issues Whyte had with Fury’s camp after complaining of a lack of communication and not being informed of the ring size.

But he said the biggest issue was to do with ticketing. His lawyer had complained he wasn’t given any tickets for his own family, but Dean said Whyte’s team weren’t allowed to sell his own tickets for the event.

‘I think ticket issues, small intricate stuff I can’t go into,’ he added. ‘With boxing, normally you have the fighter able to sell tickets. On this occasion you can’t have tickets to sell to the fighter, it was a bit unusual. 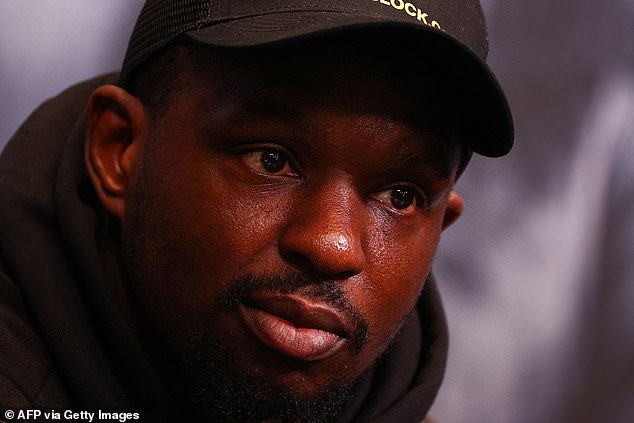 ‘A lot of Whyte fans were upset because resellers are selling them for high fees. Respectfully, Dillian should have been allowed an allocation. It was a kick in the teeth and he was annoyed about it.

Another big gripe for Whyte was being given a 20 per cent split of a £31million prize pot – amounting to £8m, while Tyson stands to make £23m. The Body Snatcher has stressed ‘it’s not the Tyson Fury show’ and demanded to be an equal partner.

Dean admitted the small share was frustrating but said without taking the deal he would not have a title shot at all.

‘It was disheartening because Dillian has earned his shot and you would expect a 65-35 split at least. But because he wanted to get the fight over the line, you’ve got to take a back step to go forward. 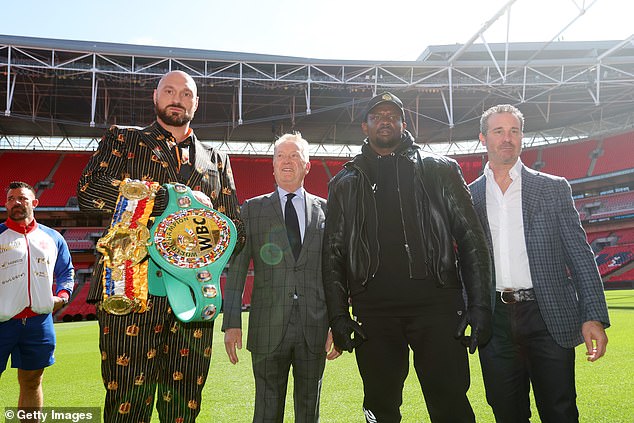 Fury and Whyte  lined up for photos on the Wembley Stadium turf, where they will do battle on Saturday night

‘If he didn’t take those concessions, we wouldn’t be here.’

It came after a fiery end to Wednesday’s press conference – which usually saw Fury and Whyte acting as the peaceful ones despite being tipped to fire back and forth barbs at each other.

Whyte led the criticism of John Fury after the event, saying he was ‘shouting and screaming like a child’.

‘Tyson Fury’s dad needs to relax,’ Whyte told BT Sport after the press conference had ended. ‘My man’s 600 years old, and he’s stepping forward, trying not to let my guys get on the stage.

‘I told him, “John calm down, you’re an adult. You keep shouting and screaming like a child, relax. It’s our day. Why are you getting yourself involved, this is mine and your son’s day.” 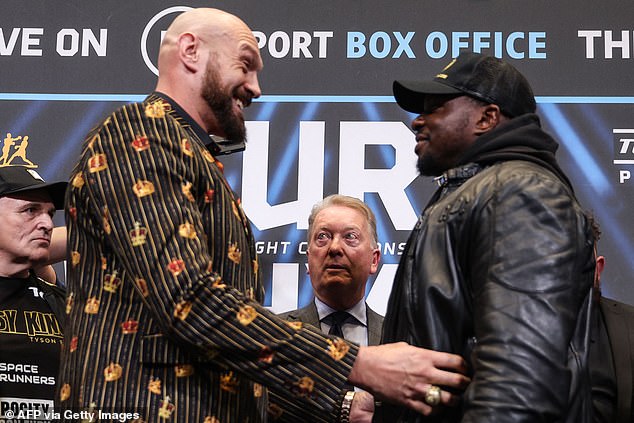 ‘He’s always trying to get in front of his son. I just said old man take it easy.’

He continued: ‘John was trying to start something. He’s stupid because it’s a big fight. He’s trying to rob 90,000 fans of a fight. John Fury is an idiot, he’s a real idiot.’

Fury was also given the opportunity to explain the scuffle in the immediate aftermath, and the Gypsy King insisted the fight will sell itself.

‘I’ve just prevented a big ruckus on stage,’ he said. ‘People want a big ruckus, they want to see punching and screaming, but let the two boxers do a fight and enjoy it. It’s not for entourages to get involved.

‘We’re here to do a fight. People are in for a real fight. We don’t need to scream and shout.’