Zion Williamson carried on his red-hot form to lead New Orleans past Dallas on Saturday night, while the Philadelphia 76ers lost out to the Los Angeles Clippers in a battle between two title contenders.

Williamson fell one point short of the career-high mark he set one night earlier in a 113-108 loss to Denver and made 13-of-20 field-goal attempts.

Nickeil Alexander-Walker added 20 points before fouling out while Brandon Ingram scored 19 against a Mavericks team led by Tim Hardaway Jr’s 30 points, but just nine came in the second half.

React to this block from Zion with an emoji 👇

Jalen Brunson added 24 points, Boban Marjanovic had 13 points and 11 rebounds and Maxi Kleber 13 and Trey Burke scored 13 each as the Mavs dealt with the absence of Luka Doncic and Kristaps Porzingis.

Dallas’ All-Star Doncic, who missed a 109-92 home loss to Indiana on Friday because of tightness in his lower back, sat out Saturday’s game because of a non-COVID illness.

Porzingis, who had 31 points and matched his career high of 18 rebounds against the Pacers, was held out because of knee injury recovery.

Jayson Tatum scored 27 points, 13 to lead a fourth-quarter comeback, as the Boston Celtics rolled to a 111-94 win over the host Oklahoma City Thunder. 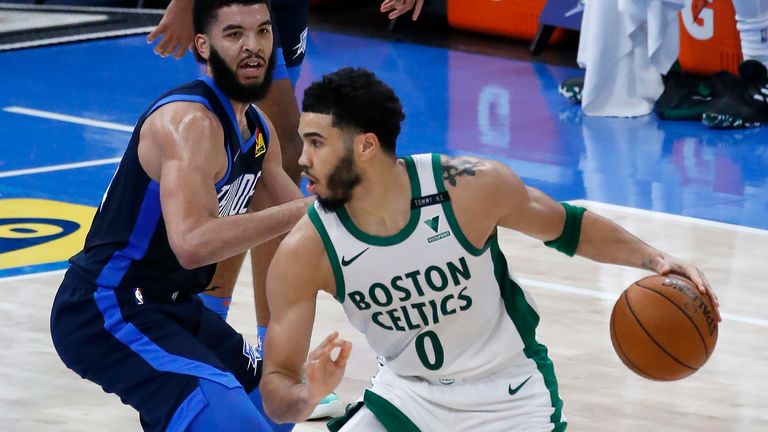 I can’t wait to get back in the garden I miss the hell out of ours fans. @celtics fans see y’all Monday! Missed y’all🥺☘️

The Celtics, who had Thursday’s trade deadline acquisition Evan Fournier miss out due to the NBA’s health and safety protocols, hadn’t led until the final period when they blitzed the Thunder with a 21-2 run to start the last quarter and gain control.

After Boston battled back to tie it in the opening minutes of the fourth, newly acquired Luke Kornet, making his Celtics debut, drained a three-pointer to give the Celtics their first lead less than two minutes into the fourth, then hit another on the next possession to put Boston’s run into overdrive.

The Thunder missed their first eight shots of the fourth and turned the ball over three times as the Celtics went from trailing by four entering the quarter to leading by as many as 18 points.

While Tatum and Kornet played major roles in the fourth, Jaylen Brown helped put the Celtics in position to pull the game out late, scoring 13 of his 25 points in the third quarter to help Boston stay in touch.

Theo Maledon led the Thunder with 22 points, while Moses Brown had career highs in points (21) and rebounds (23) – his fourth double-double in six games.

Leonard, who missed a game with a foot injury, also had four rebounds and four assists. Terance Mann scored a season-high 23 points off the bench as the Clippers won their fifth straight game and seventh in their last nine.

Tobias Harris led the 76ers with 29 points on 13-of-19 shooting and added seven rebounds and six assists as coach Doc Rivers faced the Clippers for the first time since his departure last season.

“I’m just doing what I do.” @terance_mann on his game. pic.twitter.com/UAsvt6Inn4

Rivers led them to six playoff appearances and finished with a franchise-record 356 wins over his seven seasons but it was a defeat on Saturday as the Sixers played without MVP candidate Joel Embiid, who has now missed nine of the last 10 games with a left ankle sprain – the Sixers are 7-3 without Embiid in that span.

Making matters worse for the Sixers, back-up center Dwight Howard was ejected for a second game in a row with 10:35 left in the fourth quarter. About two minutes later, Ben Simmons fouled out to complete a tough night at the office.

Donovan Mitchell scorched the Memphis Grizzlies for a second straight time with a game-high 35 points to propel the Utah Jazz to a 126-110 triumph and a two-day, two-game sweep in Salt Lake City.

Jordan Clarkson chipped in with 28 points off the bench and Rudy Gobert finished with 16 points and a game-high 14 rebounds for the Jazz, who recorded a third sweep in four tries in the NBA’s new back-to-back scheduling.

Kyle Anderson had a team-high 16 points for the Grizzlies, who hung with the league-leading Jazz all the way before losing 117-114 in the opener on Friday.

Even without Mike Conley, who was given the night off, the Jazz took command of the rematch almost immediately after the visitors had opened the game on an 8-2 run.

With Mitchell contributing a three-point hoop, a three-point play and two free throws, Utah rallied into a 13-11 lead and never looked back going up by 20, 39-19, by period’s end.

Memphis, who had won three in a row before arriving in Salt Lake City, briefly got within single digits midway through the second quarter but never mounted a serious threat.

Alec Burks scored seven of his 21 points in the fourth quarter and hit the tiebreaking thee-pointer with 1:19 left as the visiting New York Knicks held off the severely shorthanded Milwaukee Bucks to win 102-96.

“It’s all about just coming together and knowing that we got a shot.” — @drose

Burks posted his fifth straight 20-point game and set a career high with six three-pointers as the Knicks recorded a third straight victory – Julius Randle again missing for them. Burks’ biggest three-pointer came after the Bucks erased an 11-point deficit and forged a 96-96 tie on a dunk by Brook Lopez with 95 seconds left.

After a timeout, rookie Immanuel Quickley connected with Burks. Burks moved to the right side opposite Milwaukee’s bench, and before the Bucks could rotate over, he hit a clean three-pointer for a 99-96 lead.

After the teams traded turnovers, RJ Barrett missed a triple with 20.8 left and Bryn Forbes missed a three-pointer with 8.1 seconds left that would have tied the game.

The Knicks grabbed the rebound and after an unsuccessful challenge of a foul call to Brook Lopez, Burks hit the technical free throw for a 100-96 lead with eight seconds left.

Barrett also scored 21 points for the Knicks, who shot 43 per cent, hit 16 three-pointers and had a season-high 28 assists while Thanasis Antetokounmpo led Milwaukee with a career-high 23 points.

Jakob Poeltl scored a career-high-tying 20 points as the San Antonio Spurs built a huge lead and then held on to beat the new-look Chicago Bulls 120-104 and snap a four-game losing streak. 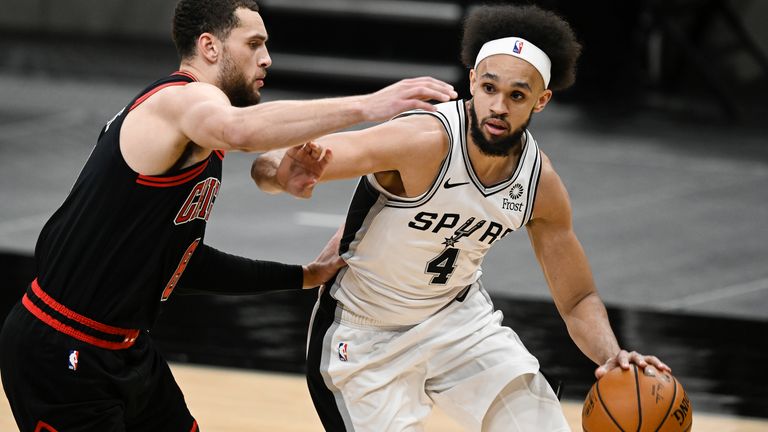 DeMar DeRozan added 17 points for San Antonio who ran Chicago out of the building in the first half, leading by many as 31 points before settling for a 65-39 half-time advantage.

San Antonio extended that margin to 36 points late in the third quarter before the Bulls found some cohesiveness with four of their five trade deadline recruits seeing court time.

Vucevic led the way as Chicago clawed to within nine points at 107-98 with just over five minutes remaining but they ran out of time and momentum.

Al-Farouq Aminu, Javonte Green and Troy Brown Jr also featured with only Daniel Theis of their new additions not getting into the action and the result was an understandable lack of cohesion.

Vucevic, acquired from Orlando on Thursday, led the Bulls with 21 points and nine rebounds on his debut. Zach Levine added 18, Coby White hit for 13, and Thaddeus Young and Lauri Markkanen scored 10 points each.

Seven San Antonio players scored in double figures. Derrick White and Patty Mills scored 16 each, Dejounte Murray and Keldon Johnson tallied 14 each and Rudy Gay added in 11 for the Spurs.

Russell Westbrook recorded a triple-double with 19 points, 19 rebounds and 10 assists as the Washington Wizards withstood a furious Detroit rally and snapped a three-game losing streak with a 106-92 victory.

Beal had 17 points and six assists in 21 minutes for the Wizards, who nearly gave away a 30-point, second-half lead. Rui Hachimura supplied 14 points and Daniel Gafford, acquired from Chicago on Thursday, contributed 13 points, five rebounds and three blocks in his Wizards debut.

Wayne Ellington’s 15 points led the Pistons, who have now lost four straight after letting the game get away from them in the last four minutes of the opening quarter.

Kelly Olynyk contributed 16 points in the first game for his new team and six team-mates also scored in double figures as the Houston Rockets avenged a loss from 24 hours earlier with a 129-107 success over the Minnesota Timberwolves.

Minnesota had won the first half of the back-to-back sequence 107-101, scoring the game’s last 22 points after Houston had led by as many as 19 points.

The Rockets built an even bigger lead by half-time in the rematch, going up 74-48, and never lifted the foot off the gas pedal the second time around.

Olynyk, acquired at the trade deadline with Avery Bradley, who sat out the game with a calf injury, in exchange for Victor Oladipo, hit five of his eight shots, including going 4-for-6 from three-point range, in his introduction to his new team.

Kevin Porter Jr, acquired earlier this season from Cleveland, paced the Rockets with 25 points while five other players scored in double figures for Houston who snapped a two-game losing streak and won for just the second time in its last 24 games.

Karl-Anthony Towns put up 27 points and a game-high 15 rebounds for the Timberwolves, who could have caught Houston and Detroit for fewest wins in the league with a victory.

De’Aaron Fox scored 20 of his 36 points in the fourth quarter, and Harrison Barnes sank a three-pointer at the buzzer to power the host Sacramento Kings to their fourth straight win in a 100-98 defeat of the Cleveland Cavaliers.

Fox, coming off a career-high 44 points in the Kings’ rout of Golden State on Thursday, took over in the fourth quarter with eight of Sacramento’s final 11 points.

His efforts helped the Kings erase a five-point deficit in the final 71 seconds, and gave Sacramento the lead with 6.2 seconds remaining.

On the ensuing possession, Collin Sexton – who scored a team-high 26 points in his return from a two-game absence due to a hamstring injury – was awarded the points after a lengthy review of Richaun Holmes’ block on Sexton’s layup attempt.

The goaltending call gave Cleveland a 98-97 lead with just 1.6 seconds remaining, and Sacramento had no timeouts to advance the ball. But Fox recorded the last of his six assists with a full-court football-style inbound pass to Barnes on the wing, who turned and fired over two defenders for the game-winning shot.

Barnes’ buzzer-beater completed a 16-point, 11-rebound double-double. Holmes also recorded a double-double for the Kings with 10 points and 14 rebounds.

Want to watch even more of the NBA and WNBA but don’t have Sky Sports? Get the Sky Sports Action and Arena pack, click here