Briann January scored a game-high 19 points, DeWanna Bonner added 18 with nine rebounds, and the Connecticut Sun clinched a WNBA playoff berth with a 76-62 win over the Las Vegas Aces on Tuesday night in Uncasville, Connecticut.

Bonner, who scored a season-high 31 points on Thursday against Minnesota, also had three steals to continue her fine form. Brionna Jones had 15 points and eight boards while Sun scoring leader Jonquel Jones finished with a season-low eight points but did contribute 10 rebounds.

Connecticut (18-6) claimed the top spot in the league standings with their sixth straight win, knocking Las Vegas (17-7) into second place.

“Our fight and our energy, man, it’s contagious,” Bonner told the team’s ESPN3 broadcast. “Still one game at a time. We still fighting for first place – Vegas and Seattle are still right there. Yeah, we clinched, but we’ve still got a long way to go.”

Chelsea Gray had 15 points and both Liz Cambage and Dearica Hamby scored 13 for Las Vegas, who had a three-game winning streak snapped.

Connecticut improved to a league-best 11-1 at home this season. The Sun have now swept the three-game season series against the Aces, winning in Las Vegas on May 23 before another home victory on June 1.

Las Vegas continue their three-game road trip at the Atlanta Dream on Thursday night, while Connecticut hosts the first of back-to-back home games against the Los Angeles Sparks. Sylvia Fowles posted 29 points and 20 rebounds, and Napheesa Collier scored seven of her 18 points on crucial baskets down the stretch to lead the Minnesota Lynx to a 76-70 win over the Seattle Storm in Minneapolis.

Despite the defeat, Seattle clinched a spot in the WNBA playoffs earlier in the day. It marks the sixth consecutive season in the playoffs for the Storm, who have won two of the past three championships.

After winning their last game with six players scoring in double-figures, the Lynx (15-9) relied heavily on the two-player attack of Fowles and Collier to upend the defending WNBA champions. Fowles registered a season-high for rebounds and fell one short of her scoring a season-high.

With Minnesota holding a 68-64 lead with 2:27 remaining, Fowles blocked a layup attempt by Seattle’s Jewell Loyd. On the ensuing possession, Collier nailed a 3-pointer to extend the Lynx lead to seven points and Minnesota held on.

Minnesota led most of the way thanks to a 25-14 first quarter, but Seattle (18-8) whittled away at the gap.

The Storm — playing the last of five consecutive road games — cut the deficit to just one point twice in the fourth quarter despite a dismal 37.8 percent shooting night from the floor.

Seattle’s shooting woes were exemplified by All-Star Breanna Stewart, who went just 6 for 23. She did make all five of her free throws to finish with a team-high 18 points.

Stewart also grabbed 16 rebounds to help Seattle to a 41-37 advantage on the glass despite Fowles’ outstanding effort. Loyd finished with 15 points for the Storm and Sue Bird added 10, but the two shot a combined 10-of-26 from the floor. Allie Quigley had a game-high 21 points with seven rebounds to lead the hot-shooting Chicago Sky to an 86-79 victory over the Atlanta Dream in College Park, Georgia.

The Sky, who welcomed the return of Candace Parker from an ankle injury, made 51.5 percent of their shots from the field, including 8 of 17 from 3-point range.

Parker, who missed the Sky’s home loss against the Minnesota Lynx on Saturday, finished with 18 points, nine rebounds and four assists.

Courtney Vandersloot had 12 points and 10 rebounds, Kahleah Cooper finished with 16 points and four assists for Chicago (12-12).

Atlanta (6-18) lost its ninth consecutive game and its fifth straight since the Olympic break under interim coach Darius Taylor.

Odyssey Sims had 17 points and Courtney Williams 16 to lead the Dream. They combined to make 16 of 38 shots from the field but struggled from beyond the arc. Sims missed all four of her 3-point attempts while Williams also failed to make her only try from that range.

Atlanta’s Tiffany Hayes, who suffered a torn right MCL in June, played in her second game since returning from the knee injury. She came off the bench and did not score in 12 minutes – remaining scoreless in the two appearances. 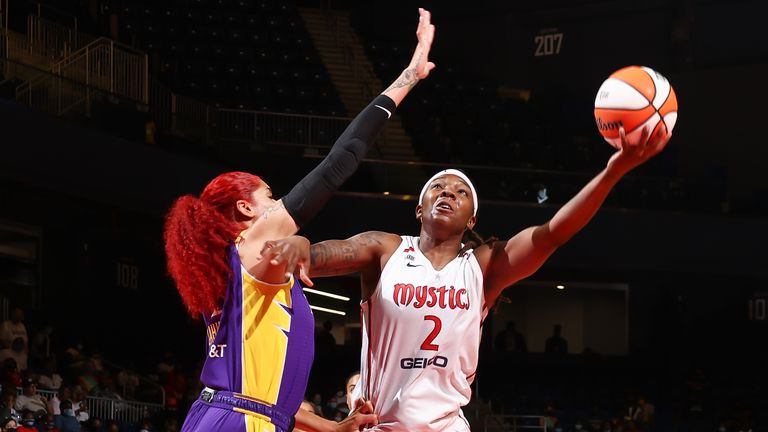 Playing without the WNBA’s leading scorer, center Tina Charles, the Washington Mystics snapped a four-game losing streak in emphatic fashion with a 78-68 drilling of the Los Angeles Sparks in Washington, D.C.

Charles, who averages 25.4 points and 9.7 rebounds per game, aggravated a hip injury during Sunday’s home loss to Seattle. Coach Mike Thibault said before Tuesday night’s tip-off that Charles would miss a couple of games.

Washington (9-14) made up for her absence for one game with a dominant performance on both ends of the floor, ending Los Angeles’ four-game winning streak. They established a 56-23 halftime lead and made the entire second half a pursuit of contractual obligation.

Myisha Hines-Allen led a balanced attack with 19 points in just 22 minutes, canning 8 of 13 field goals. Elena Delle Donne scored 18 in her second game following a 22-month absence due to back surgeries.

The game was so lopsided so fast that none of the Mystics played more than 25 minutes. Ten of the 11 players who saw action earned double-figure minutes. Walker-Kimbrough set an immediate tone by drilling a corner 3 on Washington’s first possession. It started a 14-0 run in the game’s first 2:43, capped when Hines-Allen drained a corner 3 off an Atkins pass.

The lead peaked at 37 points on four occasions in the third quarter. As a result, Sparks coach Derek Fisher displayed frustration with the officials, drawing a technical foul with 3:52 left in the period.