Southside Flyers had a team of champions but in Sunday's WNBL grand final they proved that in just under six weeks they have become a champion team, winning the club's first title.

Liz Cambage was the team's figurehead for much of the season but foul trouble limited her influence to a stellar third term against Townsville Fire in the decider. Instead it was proven veterans Leilani Mitchell, Steph Blicavs, Rachel Jarry and brave captain Jenna O'Hea who made sure their team got over the line. 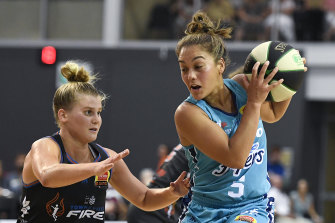 Mitchell, who won her second Rachael Sporn Medal as grand final MVP, scored 21 of her 31 points in the first half including five three-pointers to keep her side in the contest against a Fire team playing in front of a boisterous home crowd.

Cambage (14 points in 15 minutes) sat out with two fouls from midway through the first quarter until the start of the third and she made up for lost time with 12 points as her side extended its lead.

"It's been a long 55 days, it's been a marathon and the biggest grind of a basketball season I've ever felt," Cambage told broadcasters. 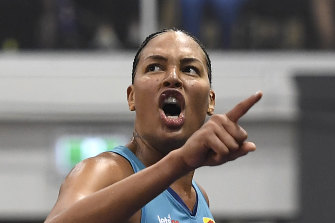 But Cambage's fourth foul in the opening play of the final term put the pressure on the Flyers but they proved they were up to the task. Bec Cole making some key baskets and O'Hea, who overcame a knee injury to suit up, coming up with a decisive three-point play that pushed the lead to 14 points.

Cole (22 points) knocked down the finisher with just under three minutes to play nailing a three to push the lead to 93-74.

The title is coach Cheryl Chambers' second. It is also title No.2 for Cambage, while O'Hea, Blicavs and Mitchell both become three-time winners. The Flyers' ability to bring Blicavs back from having her first child and Jarry back from time away from the game proved invaluable throughout the season and especially in Sunday's grand final.

Blicavs nailed two vital threes in the first half and filled crucial minutes as did Jarry and O'Hea who filled the breach left when Cambage was forced to the bench.

The Flyers took over the licence from the Dandenong Rangers in 2019 with Gerry Ryan and his family taking responsibility for the team.