The Sydney Kings could soon be on the hunt for a new coach after current boss Will Weaver was given permission to travel to the US for interviews with NBA teams.

Weaver – a former assistant at the Philadelphia 76ers, Brooklyn Nets and Australian Boomers – was last month linked with coaching vacancies at the New Orleans Pelicans and Oklahoma City Thunder. 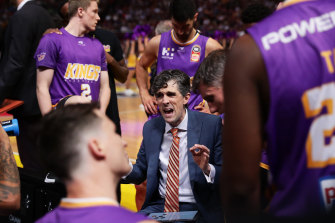 Will Weaver could be moving from the NBL straight to the NBA.Credit:Getty Images

The Pelicans have since appointed Stan van Gundy but, according to ESPN, Weaver is in quarantine in Oklahoma City and a strong contender for the Thunder job.

The Kings have not only given him their blessing but a club statement said the NBL powerhouse had "actively encouraged" the 36-year-old to pursue opportunities in America since bringing him to Sydney in March last year.

"We support Will in this process. It is implicit to our vision for the Sydney Kings, a club that helps ambitious people move forward in their careers," Kings owner Paul Smith said.

"Be it a player, coach or member of our management team, my greatest thrill is seeing people achieve their ambitions.

"Equally, we have an obligation to our players, staff, members and fans to ensure the Kings continue to play for the upcoming season and ongoing success.

"The fact that our head coach [is] exploring an exciting career opportunity is just part of the reality of pro sport and its constant evolution. It's exactly why our planning doesn't have an off switch."

Weaver is regarded as one of basketball's brightest young minds and is highly rated within NBA circles, particularly since making the move to Australia for more senior coaching experience.

He guided the Kings to a 20-8 record in his first season at the helm – enough to finish top of the NBL ladder last season, although they controversially pulled out of the grand final series against the Perth Wildcats, which unfolded during the initial stages of the pandemic.

Before moving to Sydney, the Texas native was the head coach of Brooklyn's NBA G League affiliate, the Long Island Nets, and won the competition's coach of the year award in 2019.

Weaver was also reportedly in contention to become the Boomers' full-time head coach after the resignation of Brett Brown, having previously worked as an assistant to Andrej Lemanis and as a caretaker coach earlier this year.

While Weaver is away, the Kings will be guided through their pre-season preparations by assistant coaches Adam Forde and James Duncan.

The NBL season still does not have a start date locked in yet, but it won’t begin until at least mid-January.