South East Melbourne Phoenix coach Simon Mitchell loved that his side fought back from 16 points down to open its NBL Cup campaign with a win on Sunday.

But after the game he was still staggered as to how his team struggled to find some consistent play. 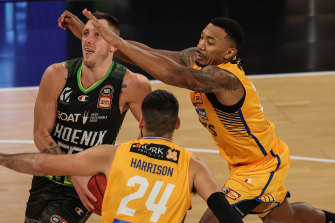 Mitch Creek of the Phoenix comes in for plenty of attention against the Brisbane Bullets on Sunday.Credit:Getty Images

A horror start from the Phoenix resulted in them falling behind 16 points to the Brisbane Bullets in the first term at John Cain Arena and they still trailed until Mitch Creek (29 points, nine rebounds) put his side in front just before half-time.

Then with Creek firing, import guard Keifer Sykes controlling the game and shooter Cameron Gliddon on target, the Phoenix built their own double-figure lead, eventually winning 99-83.

The 183-centimetre Sykes became the first player since LaMelo Ball last season to record a triple-double with 14 points, 10 rebounds and 11 assists, while Gliddon had 19 points and three steals including five of eight three-point shooting.

The Phoenix not only get a regular-season win but they will get six points towards the inaugural NBL Cup with three for the win and three for winning three of the four quarters.

“I really don’t know what happened out there today,” Mitchell admitted.

“I felt like it was a really strange game. Huge ebbs and flows. It was a struggle for us with the foul differential early and we couldn’t make a shot in the paint to save ourselves.

“Then we couldn’t get ahead. Then when we finally got ahead we ran with it.”

Creek didn’t mince words about his team’s inconsistent play, which has them at 5-4 (win-loss) although they have won their last two games. 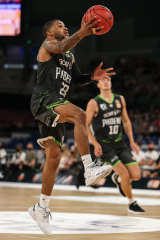 Keifer Sykes notched a triple-double against the Bullets.Credit:Getty Images

He said some harsh words were spoken in the first term. “I don’t know if I can repeat what I said,” Creek said.

“I don’t try to get too high or too low and just stay on an even medium. But sometimes that harsh passion is enough to light that fire in someone else.

“We are getting better but it’s, honestly, about not playing like pussies. We can see what we do when we play tough and hit first.”

Star Phoenix signing Ryan Broekhoff arrived in Australia from the US on Sunday to begin a 14-day quarantine with his wife and son. Mitchell was uncertain when he will make his debut but pledged not to rush him.

Phoenix veteran Adam Gibson sat out on Sunday and he could miss several games as he recovers from a slight calf tear.

The Bullets lost veteran guard Jason Cadee to what appears to be a serious ankle injury and with all teams playing eight matches over the 20-day period of the NBL Cup, he could be out for several games.

Melbourne United will be looking to bounce back from their 89-85 loss to Perth Wildcats on Saturday to open the NBL Cup.

United (6-1) will be back on court against Cairns Taipans on Monday at 7.30pm AEDT and star centre Jock Landale said he was disappointed their chance at an undefeated season was over after he had predicted they could go undefeated.

“Every loss hurts, it always sucks,” Landale said. “I genuinely believed that with the group we have we could have gone undefeated but the mentality is the same. Every game we want to win and every game we should win.

“Let’s see if we can go with only one loss this season. We try to carry on winning every game that we can.”