Make no mistake about it, for much of this crucial Game 6 encounter, every bit as frantic as the rest of this series between the two offense-only clubs, the Blazers seemed in control.

The Nuggets looked off. Their body language. General demeanour. The fact they got chippy with the referees early and did not stop complaining about the foul calls. Even so, they did start hot. Well, Michael Porter Jr. did to be more exact.

The 6’10 forward, every bit as cruelly effortless as Kevin Durant, fired home six of his seven threes in the first quarter, tying the NBA playoff record in the process. He had 22 in the opening period. The problem for Denver was that Jokic had zero and two fouls. And that the Nuggets were still down by four.

Michael Porter Jr. has 22 points. We haven't even finished the first quarter. pic.twitter.com/lnthKgpvN3

Neither team could stop the other on the defensive end, the basketball equivalent of two drunk men throwing haymakers outside a pub. The only difference through the first half at least was the Blazers were shooting the lights out from deep, almost 58 per cent compared to the Nuggets’ 39.

Blazers head coach Terry Stotts mirrored Jokic’s minutes with his own Eastern European big man Jusuf Nurkic, and the Bosnian did an excellent job of limiting his opposite number to just nine points through the first two quarters.

By the time Damian Lillard drilled a step-back three to beat the buzzer at the end of the half, Portland’s lead had grown to nine. They looked well on their way.

Damian Lillard ends the half the only way he knows how 👌 pic.twitter.com/ABmSy7nhWU

But in the third it all came crumbling down. Nurkic lost his cool and committed four fouls in the quarter, one of which seemed to be a completely clean contest on a Jokic three.

Stotts chose not to challenge the call and it proved costly in more ways than one. Jokic drained all three free throws while Nurkic, perhaps incensed by his coach after passionately begging him to question the decision, committed an offensive charge a few possessions later which meant he had to temporarily retreat to the bench.

Nurkic has averaged five fouls per game this series and given the night-and-day difference he makes to the Blazers on the court compared with off it, that just cannot happen. More discipline is required. Without him there, both Jokic and Denver gathered a head of steam.

Portland led by 14 with five minutes left in the third quarter. By the time the buzzer sounded that lead was just three, the electric Monte Morris closing the gap with a remarkable running one-handed three-pointer.

12 minutes then to save a season for Portland. It was no surprise that everyone looked to Lillard, expecting the clutchest player in the league to carry them over the line.

What a play by Monte Morris to cut the lead to just three at the end of the 3rd quarter! pic.twitter.com/iYtUxbltno

Morris swished a deep two over Carmelo Anthony to give Nuggets the lead in the fourth – their first since the opening quarter. Anthony hit back with two vintage midrange buckets of his own. He has over 27,000 points in his career, around half of them were for the Nuggets. It showed.

Despite his efforts, the defensive tenacity and shooting of Robert Covington, and the dynamism of Norman Powell, it wasn’t to be. Damian Lillard, so often the decisive factor in the fourth quarter this season, started it 0/6. He finished it 1/6. CJ McCollum, too, looked out of sort and made only one basket of four in the final period. 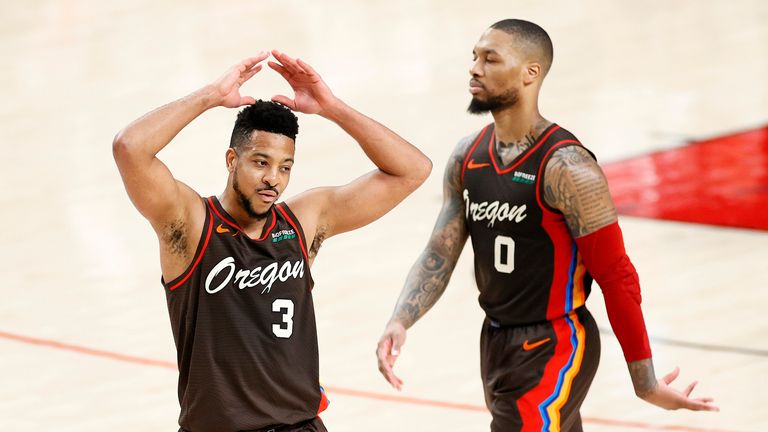 Enter Jokic. The soon-to-be MVP got rolling after those Nurkic fouls in the third and did not stop, flattening the Blazers to the tune of 27 points in the final two periods. He rumbled to the basket like a man possessed and ultimately, Portland had no answer to him with their own big in foul trouble.

Credit to Morris, too. He had nine points down the stretch, 22 on the night and was probably the second-best backcourt player throughout the series behind Lillard.

Let’s not forget the Nuggets are missing their two key guards in Jamal Murray and Will Barton but yet, didn’t appear as though they were missing anyone. In Morris, Jokic appeared to have the perfect pick and roll partner to unpick the Blazers defensive coverage when it mattered. His chemistry with Denver’s other (comparatively) diminutive guard, Facu Campazzo, needs no reiterating.

For Portland, this might well be it for Stotts, or even their prized backcourt of Lillard and McCollum. They had a 14-lead at home in a must-win game to force a Game 7 and they did not do it. He has been with the team since 2012. At some point something has to give. Lillard’s prime remains something too precious to waste.

Damian Lillard set a new NBA record for threes made in a single #NBAPlayoffs series with 35 3PM. pic.twitter.com/DLICpeZGip

In the end, it was not close, a heroic JaMychal Green offensive rebound and Aaron Gordon’s corner three giving Denver a 124-115 lead with just over 50 seconds remaining. Morris hit two free throws to make it 126-115, the final score, as the Blazers slowly trudged off the court and out of the playoffs in the first round once again.