Concertista back with Fairyhouse win

The WNBL will play on the broadest digital stage in its 41-season history with every game either live-streamed or broadcast this campaign.

The league announced its new broadcast deal on Friday with all 60 games of its condensed season to be live-streamed on Kayo Sports. The ABC will broadcast two live games a week for the first time since budget cuts saw the network drop the league in 2015.

Fox Sports will also show four games live most weeks, further expanding the league's broadcast footprint for the rapid-fire season that will see all eight teams play in North Queensland tipping off on November 11 and finishing with the one-game grand final on December 20. 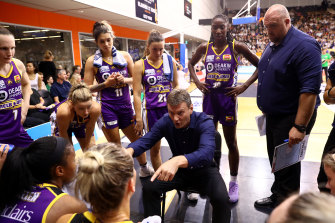 The condensed WNBL season will be shown on Kayo, ABC and Foxtel. Credit:Kelly Defina

While there will be no imports this season, WNBA star Liz Cambage has returned to the league, joining the Southside Flyers, while a host of potential Australian Olympians will join her on-court including Ezi Magbegor, Cayla George, Tessa Lavey, Jenna O'Hea and Sami Whitcomb.

Adelaide Lightning has lost star signing and Opals/WNBA forward Alanna Smith, who will need ankle surgery so won't be able to play.

Lightning coach Chris Lucas told Channel Seven Adelaide he expected Smith would play for the team next season unless she goes to Europe.

ABC will simulcast the Fox Sports games on Saturday 5pm AEDT and Sunday 3pm AEDT on ABC1 and ABC iView.

Lauren Jackson, Basketball Australia head of women's basketball, hailed the deal as a big moment in league history with hopes the WNBL will draw new fans with so many sports in their off-seasons.

"The Australian Opals and our under-19 women's team are both ranked world number two and this broadcast arrangement will enable all Australians to witness the skill, strength and athleticism of our players," Jackson said.

"The 2020 WNBL season will double as important preparation for the Australian Opals ahead of the Tokyo Olympics and the 2022 FIBA Basketball World Cup, which will be hosted by Sydney.

"With all the opportunities that this season presents us, being able to broadcast all our games live across the nation was at the top of the list. This is a wonderful outcome for women's basketball in Australia, and we are thankful for the support of both Foxtel and the ABC."