Miami Heat forward Bam Adebayo is planning to play in Game 4 of the NBA Finals against the Los Angeles Lakers, according to reports.

Adebayo, who has missed Games 2 and 3 after suffering a neck strain in the series opener, was upgraded to questionable on the official injury report released on Monday evening.

There was a further boost for the Heat four hours before tip-off on Tuesday evening, as ESPN reported that the All-Star center was planning to make his return.

Adebayo spoke about the possibility of returning during his media availability on Monday.

“Tomorrow I could play. Tomorrow they could tell me no,” Adebayo said. “When they say I’m ready to play I’ll be out there.”

Heat guard Goran Dragic (torn left plantar fascia) discussed a similar situation after he missed Games 2 and 3 due to his injury. He remains doubtful to face the Lakers in Game 4, live on Sky Sports Arena in the early hours of Wednesday morning (1:45am).

“I don’t have [a] timetable [for return],” Dragic said on Monday. “It’s not the easiest thing right now for me.”

Adebayo suffered a neck injury in the third quarter of Miami’s Game 1 loss to the Lakers, when he slammed a shoulder into Dwight Howard while driving into the lane. Miami confirmed X-rays taken at the arena were negative. But Adebayo was already clearly favouring the injury suffered in the Eastern Conference Finals, as he wore a sleeve on his left arm.

“It’s up to the medical staff. I’m trying to get back as quickly as possible,” Adebayo said. “They’re just trying to make sure I’m safe and I’m ready to play. So, it’s really day-to-day. But yeah, it sucks sitting on the sideline.

“It’s difficult. Crazy fact: I’ve only missed one game since my rookie season. I don’t like missing games. So, if you’re wondering if I’m really injured, then there you go. I’ve played through bruises. I’ve played through getting beat up. But it’s one of those things where I make it to my first Finals, and it’s like we dream of things like that. So it’s been difficult for me mentally because it hurts me that I can’t be out there and help my team.” 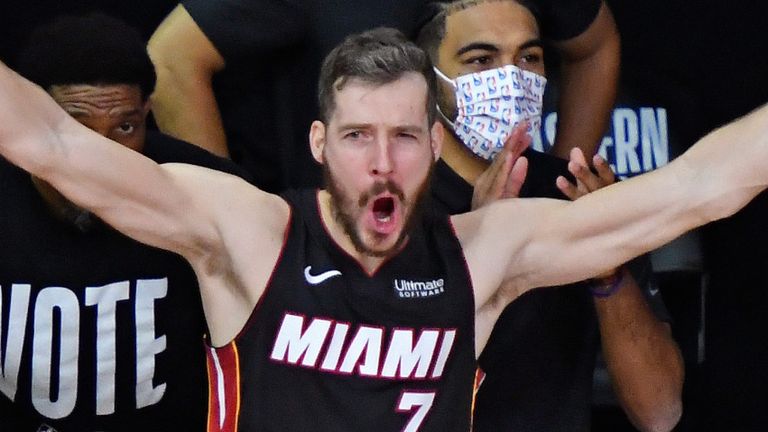 Dragic, meanwhile, did not play in the second half of Game 2 after suffering his injury. Dragic has been able to put pressure on the foot, but the guard said dealing with the pain is the most significant factor in his potential return.

“I’m doing everything I can do,” Dragic said. “It does feel better than when it happened. We’ll see. I snapped it, so it’s already bad. I’m dealing with a lot of pain, so that’s the main concern. I don’t want to be a liability on the floor for my team. I want to be the best that I can be.”

Adebayo and Dragic have taken on significant roles for Miami throughout the playoffs with the duo averaging 38 points combined. Heat coach Erik Spoelstra pointed out both have lobbied to play since suffering their respective injuries, but the team wants to make sure it handles their returns properly.

Los Angeles captured victories in the first two games to take a 2-0 lead before Jimmy Butler racked up a 40-point triple double in Game 3 to pull Miami within one game in this best-of-seven series.

Get NBA news on your phone

Want the latest NBA news, features and highlights on your phone? Find out more

“You have to compartmentalise as a team,” Spoelstra said. “We came here with a purpose and a task at hand, and everybody is just focusing on that, whoever is available, until if or when we get those guys back. Even those guys just being in the locker room and in the huddles, that moves the needle in whatever way they can. There is an energy to that. There is a karma to that. We’ll just see what happens. The body will heal as it will heal.”

Want to watch even more of the NBA and WNBA but don’t have Sky Sports? Get the Sky Sports Action and Arena pack, click here.