Do the LA Lakers still look like they could win back-to-back championships? Can the Utah Jazz make any tweaks that ensure they will come out favourably in certain match-ups? What moves do the Philadelphia 76ers need to make to finally do some damage?

That is what teams are trying to figure out at this stage of the season.

The key to answering many of those questions lies in trade deadline acquisitions. Marc Gasol was one of the most recent mid-season deals that helped a team become champions when he joined the Toronto Raptors from the Memphis Grizzlies in 2019. One of the most famous in NBA history is the Detroit Pistons picking up Rasheed Wallace on their way to a championship in 2004.

Who are the difference-makers available as we edge ever closer to the trade deadline? 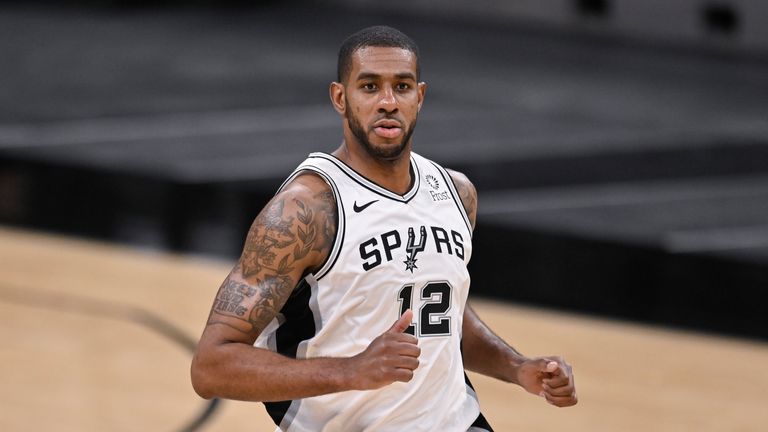 The San Antonio Spurs had to make do last summer. LaMarcus Aldridge was the team’s best player and the veteran dragged Gregg Popovich’s side to several wins throughout the season. However, he then opted for shoulder surgery to end his season early before the league went to Orlando for the final eight games.

He might have made the difference and helped the Spurs maintain their uninterrupted streak of making the playoffs, but they pivoted and used the high-pressure situation to bring in some of the young talent. It worked. This season Dejounte Murray, Derrick White, Keldon Johnson, Devin Vassell, Lonnie Walker and Jakob Poeltl have benefitted from the extra playing time and opportunities.

It’s not just the youngsters’ confidence to take extra shots that has carried over from the bubble to this season, Aldridge has only played 21 of 35 games this year, which has opened up the floor for the rest of the team.

This makes Aldridge slightly redundant. The concept of the Twin Towers in San Antonio has long been defunct and it is incredibly rare to see two bigs share the floor these days. The fact that the offense is mainly run through the perimeter – executing dribble hand-offs with bone-crunching screens from the bigs – means Jakob Poeltl and even Drew Eubanks are better fits as defensive specialists who are useful on offense, banging inside for put-backs and drawing the attention of defenses on rolls to the basket.

For all these reasons, there is a swing of 8.8 points when Aldridge steps off the floor, and not in a good way for the mid-range sniper. But that does not mean the 35-year-old cannot be useful.

Coming off surgery he has been eased back, averaging fewer than 26 minutes per game – the lowest since his rookie season. As a result, his counting stats are lower than they have been for a long time, but per-36 minutes he averages 19 points, six rebounds and two assists, which is not miles away from his career numbers. What’s more, he has continued to take the half-step back that so many wanted him to earlier in his career and is shooting 3.6 threes per game this year – a career high – while hitting 36 per cent of them.

He’s not someone to build an offense around anymore, but there are teams lacking a competent back-up big man that stand a half-decent chance at making a Conference Finals.

After reaching the NBA Finals last year, the Miami Heat have recovered from a rocky start and need some depth if they want to get back there, especially now that Meyers Leonard is not expected back for the foreseeable future. The Boston Celtics have also climbed back into the hunt for a top-four playoff spot and could do with a big who can be relied on for stretches of the game to ease the burden on Jaylen Brown and Jason Tatum in the scoring department. Aldridge’s old team the Portland Trail Blazers have also expressed interest in seeing the big man return, where he would fit in well and there would be an obvious spot in the rotation at least until Jusuf Nurkic returns, which could be as early as two weeks from now.

Other teams, such as the Phoenix Suns and the LA Lakers might make sense, but buyouts are more likely rather than trades due to having little that appeals to the Spurs. Whether it comes via trade or contract release, one team will pick up Aldridge and he could be a difference-maker in the right situation. 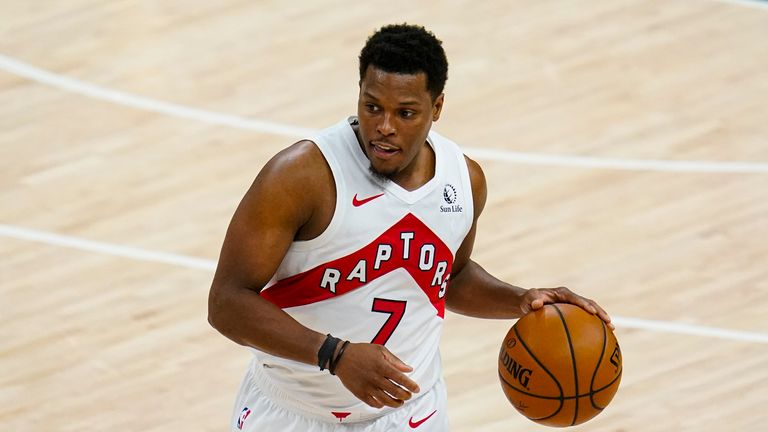 It’s time for the Toronto Raptors to move on. General manager Masai Ujiri had plans to do so a few seasons ago after years of failing to get past LeBron James in the Eastern Conference.

Instead, he seized on the opportunity to swap DeMar DeRozan, who had been loyal to The Six since he was drafted in 2009, for one season of Kawhi Leonard, who was forcing his way out of the San Antonio Spurs.

The gamble paid off and that lone season saw the Raptors win a championship, but Ujiri has continued to dismantle the team slowly. Leonard went, so too did Marc Gasol and Danny Green, as well as Serge Ibaka. The team is now in the hands of the youngsters who were coming of age during that championship season, and while Kyle Lowry is still loved in Toronto, his presence seems like a hangover among Fred VanVleet, Norm Powell, OG Anunoby and Pascal Siakam.

Given the chance, however, Lowry can still play big minutes on a championship contender. If there is a charge to be drawn in a high-pressure situation, he will slide to the spot milliseconds before the offensive player takes off. If there is a three to be made, he will take it and probably hit it, despite missing his previous seven and putting his team in a tough spot. If there’s a big man who has struggled to get the ball in the right spot after facing increased pressure during the playoffs, there is maybe one point guard in the league who is better at throwing the perfect entry pass, but Lowry is right up there alongside Chris Paul for that.

Lowry is still posting a good box score of 18 points, seven assists and five rebounds while shooting 44 per cent from the field and nearly 40 per cent from distance, despite being 14 years into his career. The teams that have been linked to him in this trade window include his hometown team of the Philadelphia 76ers, where he has an elite big man in Joel Embiid to pass to and can join an already good defensive squad, but take on the smaller guard role alongside Ben Simmons in some line-ups.

He could rejoin Leonard with the LA Clippers and rekindle the championship chemistry they had two years ago. The Denver Nuggets would do well to trade away some of their depth to enhance the top rotation.

Miami have also expressed an interest in the point guard, who might be able to offer a championship mentality to a team that could not quite get over the hump last year. Soldiers will come with all types of specialities and strengths. For a team with championship intentions, perhaps the most valuable soldier comes in the shape of a 3-and-D wing who will defend the team’s best player, never demand the ball and still hit a load of shots from long-distance when the defense collapses.

In years past, Danny Green filled that role for the Toronto Raptors or the LA Lakers. We have seen Klay Thompson do it for the Golden State Warriors to the point where he was so good at it he became an All-Star. There have been Shane Battiers, Trevor Arizas and Robert Horrys that have played this role for generations of NBA basketball, and no person defines it better right now than PJ Tucker.

He is not as agile as he once was, but as recently as last year he was defending every position on the court after the Houston Rockets traded away Clint Capela to make Tucker their starting center at 6ft 5in.

On offense, he would stand in the corner on basically every possession, just waiting for the ball to ping out between seven arms from the four different players that crowded James Harden or Russell Westbrook. Tucker hit 36 per cent from three – a down season by his standards – but would then jog back up the court and cover the mistakes of those same All-Stars to keep his team in the game.

He made some terrible teams passable on defense and if you are a team with title intentions, you will have to go up against Kevin Durant, James Harden, Blake Griffin and Kyrie Irving on the Brooklyn Nets. Or Giannis Antetokounmpo, Khris Middleton and Jrue Holiday on the Milwaukee Bucks. Or Paul George and Kawhi Leonard on the LA Clippers. Or LeBron James, Anthony Davis and Dennis Schroder of the LA Lakers.

Tucker can be a real pain to any one of those players, and play good help defense on one or two of the others. On the other end of the court, he will stand in the corner and hit 35-40 per cent of the open shots his All-Star team-mates will give him.

The Rockets have reportedly bragged 70 per cent of the league have inquired about Tucker’s availability, with some of the more likely candidates appearing to be the Lakers, the Bucks or the Miami Heat – the latter looking to replace the hole left by Jae Crowder, who helped the franchise reach the Finals last season in a similar role.

Multiple suitors will be laying down offers to Houston, so you can be sure we will see Tucker finish the season in a different jersey – perhaps one that lifts up the Larry O’Brien trophy.

While some of the big names have already been moved this season – James Harden at the start of the year and more recently Blake Griffin have joined the Brooklyn Nets – there are others beyond this top three that could have a big impact on the trade deadline should their teams receive offers that are worthy of pushing the button.

Bradley Beal has long been discussed as a potential super team piece, though chatter around him has been quieter lately.

Aaron Gordon has apparently expressed interest in moving on from the Orlando Magic. This could be a situation in which the team and his agent are putting out feelers, so there might not be much movement during this window but he certainly has the talent to be a secondary scorer on a good or great team.

With the Cavs still looking to trade Andre Drummond, a few contending sides are being heavily linked 👀

Andre Drummond will be with another team in the next few weeks, likely a contender that needs size. The LA Lakers and the Brooklyn Nets have expressed interest, and he would possibly help the Boston Celtics, though it’s tough to imagine any team signing on for a lengthy stint with a big man who has shown little versatility. He will be of more use as additional depth and size for a run to the Finals.