Seven-time All-Star LaMarcus Aldridge has announced his retirement from the NBA after playing with an irregular heartbeat in his last game for the Brooklyn Nets.

In a lengthy message posted to social media, Aldridge detailed how he played on April 10 with an irregular heartbeat. It was just his fifth game with the Brooklyn Nets since he signed a free-agent deal with the team.

He played 23 minutes and scored 12 points that night in a loss to the Lakers but continued to feel worse after the game. He informed the Nets of his symptoms the next morning, and the team arranged medical assistance for him right away.

“Though I’m better now, what I felt with my heart that night was still one of the scariest things I’ve experienced,” Aldridge, 35, said in his farewell message.

“With that being said, I’ve made the difficult decision to retire from the NBA. For 15 years, I’ve put basketball first, and now, it is time to put my health and family first.”

The 6-foot-11 Aldridge became a free agent on March 26 after the San Antonio Spurs bought out the remainder of his $72m contract. He immediately stepped into a starting role with the Brooklyn Nets, filling in for an injured Kevin Durant. 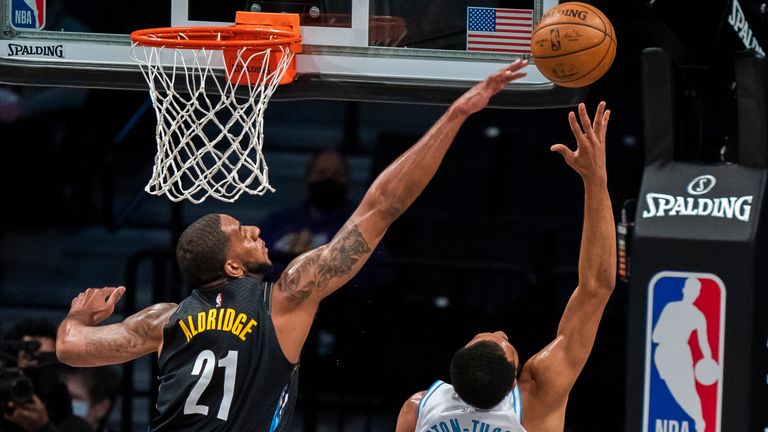 “I’m thankful for everything this game has given me: the great memories, including all the ups and the downs, and the friendships I’ve made and will keep with me forever,” he said.

He concluded his note with this message: “You never know when something will come to an end, so make sure you enjoy it everyday. I can truly say I did just that.”

“The Nets organisation fully supports LaMarcus’ decision, and while we value what he has brought to our team during his short time in Brooklyn, his health and well being are far more important than the game of basketball,” Marks said.

“We know this was not an easy decision for him, but after careful consideration and consultation with numerous medical experts, he made the best decision for him, his family and for his life after basketball.”