The Sydney Kings have snapped their late-game hoodoo and ended a four-game losing streak in a 24-point victory against the Brisbane Bullets on Sunday.

In their last four clashes, the Kings collapsed in the fourth quarter to hand their opponents victory, an issue that has becoming increasingly frustrating for fans.

But the Kings finally held on until the end against the Bullets, taking their fourth win of the season 97-73 at Qudos Bank Arena.

Coach Chase Buford put the win down to the leadership of Xavier Cooks, who had fire in the belly after being ejected in Friday’s clash against the Bullets. 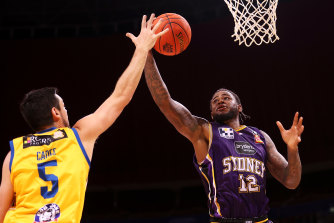 The Kings have managed to break their fourth-quarter hoodoo.Credit:Getty

Cooks, who has become a solid rock this year for the club amid a myriad injuries, was sent from the court in the second quarter during the first clash against the Bullets after back-to-back technical fouls.

But Cooks bounced back in style in time for Sunday’s game and delivered 13 points, 12 rebounds, five blocked shots and two assists for his side.

“He was fired up obviously,” Buford said.

“He was frustrated how the other night went, it was a tough break to have him gone. I think he came out and rectified it and redeemed himself a bit tonight. It was terrific to see him out there.”

Fellow Kings star DJ Vasiljevic, who made back-to-back threes in the third quarter to solidify Sydney’s lead heading into the back end of the match, also impressed Buford.

The young guard had his rookie 2021 season abruptly ended as a result of an Achilles injury but finished with 23 points, two rebounds and two assists on Sunday.

“He’s done a terrific job attacking his rehab. Since I came in, he’s been the hardest worker, he’s in there doing early work,” Buford said.

“He’s trusted our team to get him back, and it’s been great to have him back on the floor.”

Jarell Martin (19 points and 12 rebounds) and Jaylen Adams (17 points, six boards and five assists) were other notable contributors for the home side.

The Kings led 53-32 at half-time before things got worse for the Bullets in the third quarter.

But once again, the Kings failed to maintain the urgency in the final 10 minutes with the Bullets managing to outscore the home team by four points in the final quarter.

Buford said it was the main topic of conversation for the group during their half-time chat.

“We just talked about starting the fourth quarter with a mentality of 0-0 and come out playing like we did to start the game,” he said.

“I think outside of a few possessions we did that for the most part.”

The Kings will host the Perth Wildcats on Sunday in their next outing.