Rohan Browning has delivered when the stakes were highest, in the biggest race of his life at the Olympics, against the best field he has raced, and ran into history for Australia.

The sprinter became the first Australian to make the semi-final at an Olympics in more than 20 years beating a former world champion Yohan Blake in the process as he set a personal best and came achingly close to also breaking 10 seconds for the first time.

The 23-year-old star won his heat in 10.01s and will now be the first Australian since Matt Shirvington in 2000 to make the semi-final in the Olympics’ biggest event. Only four men ran faster than his 10.01s in the heats at Tokyo stadium on Saturday night. 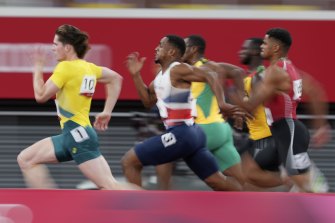 Rohan Browning, left, of Australia, leads the field in his heat of the men’s 100m.Credit:AP

“If I can take one thing away from it Australia don’t go out and anti-vax protest. Stay at home and get around the under-dogs at the Olympics,” Browning said.

“It is nice to point [how] people wrong.

“It feels good to take a few big scalps early on. I still won that race so there is more to pull out of myself. I can definitely be pushed a bit more, it is the one thing I have been lacking on the Australian circuit (being pushed by competition). And it is the thing a lot of people pointed to when they say I was not capable of making a final or doing well at this Olympics.”

Winning the race and beating a runner as credentialed as Blake was more satisfying than the fast time he ran.

“I have wanted to get him for a long time, all the world’s best guys are on my hit list,” Browning said.

“I knew you would have to front up to everybody at some point. You look at the start list and I thought, ‘jeez I have got one of the tougher heats but you would rather do it the hard way because it is so much more satisfying’.”

Browning had an outstanding start, getting away clearly quickest in the field and setting up his race in the first 40 metres.

“I have had one or two things I have been working on to improve my race and I felt the component parts have all been there but I haven’t run the race yet and put it all together … I have got out the back there and lost my mechanics. Having said that I still ran away with it so it gives me a lot of confidence going into the semis and the final,” he said.

“I was not 100 per cent sure if I won it or not because I was in lane one so everyone was on my right. It’s just elation.

“You come here to the Olympic Games and I have so much respect for every athlete because you make yourself so vulnerable being out there and performing in the thing you put your life to for so many years.”

Browning said the history of being the first Australian to go through to the semis in 21 years was irrelevant if he did not advance further.

“There is no (making) history until the final,” he said.

“That’s the thing about championship running, you might run a world record in the heat and it doesn’t mean any thing unless you get on the podium. I am taking it round by round but hopefully I put a few people on notice now.”

If I can take one thing away from it Australia don’t go out and anti-vax protest. Stay at home and get around the under-dogs at the Olympics. It is nice to point people wrong.

He certainly put the world on notice. On a night of varied results when the fastest man in the world this year, American Trayvon Bromel, the favourite for the medal ran fourth in his heat and missed automatic qualification but still advanced on the next fastest qualifier times.

Andre De Grasse, the man who won bronze in Rio and was dubbed by Usain Bolt as the future of the sport and the man who reminded him of himself, delivered on Bolt’s prediction and won his heat.