Two female athletes banned from competing in the Olympic 400 metres because they have elevated testosterone as athletes of different sexual development have both won through to the final of the 200 metres.

Namibian sprinters Christine Mboma and Beatrice Masilingi both came second in their semi-finals and will run in the final on Tuesday night. 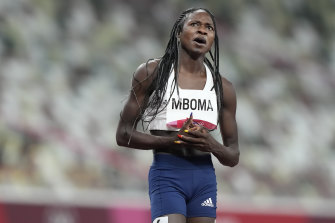 Christine Mboma has qualified for the 200m final.Credit:AP

Both are banned under IOC and World Athletics rules from competing in any event from 400 metres to 1500 metres because of their elevated testosterone levels. There is no ban on them competing at events shorter or longer than those two distances.

Mboma ran a personal best and set a new world under-20 record when she ran 21.97 seconds to come second in her semi-final to Jamaican champion Elaine Thompson-Herah who was pushed to run a personal best 21.66 seconds.

Masilingi also came second in her semi-final, running 22.63 seconds to come in behind Jamaica’s Shelly-Ann Fraser-Pryce in the race that Australia’s Riley Day finished fourth.

The two 18-year-olds had run four of the top five 400-metre times in the world this year until they were informed in July they had elevated testosterone and would be unable to continue to compete internationally in their best event.

It was reported that until they were tested by World Athletics neither of the athletes, nor their families, nor the Namibian Athletics body, were aware of their condition.

World Athletics ban athletes with naturally occurring high testosterone and require them to medically lower their testosterone level, primarily by taking the contraceptive pill or else not be able to compete at distances from 400 metres to 1500 metres.

In 2019, the Court of Arbitration for Sport upheld World Athletics’ DSD rules after they were challenged by South African runner Caster Semenya.