Cathy Freeman winning the 400m at the Sydney 2000 Olympic Games as the nation cheered itself hoarse was a case in point. Just 400m for her, a small step, but a mighty leap forward for us as a country.

Ian Roberts becoming the first active rugby league player in the world to declare himself gay was another.

The Wallabies declining to play South Africa for a couple of decades was even more emblematic of the opening point.

Such stories have implications and fascinations way beyond the individuals involved, and allow society as a whole to see issues so much more clearly through the prism of sport bringing so much more than mere sport itself into focus.

A current case in point, funny you should ask, is all the rage in England and indeed, globally. 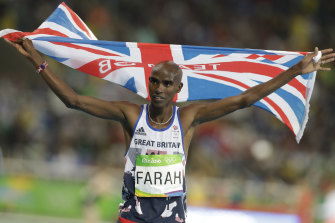 Mo Farah celebrates after winning the 10,000m gold medal for Great Britain at the 2016 Rio Olympics.Credit:AP

It’s sort of about the great long-distance runner who dominated at both the London and Rio Olympics, winning four gold medals. Yes, it’s about Sir Mo Farah, while going a long way beyond Sir Mo Farah and … not really being about the actual Mo Farah at all …

For the news as it turns out, is that much of what we thought we knew about Mo Farah is false. Yes, he was a great runner, and there is no doubt about that. But instead of legally immigrating to Great Britain from war-torn Somalia as a lad, as was thought, the truth is a lot more complex – and interesting. On Tuesday, as part of some pre-publicity for a documentary to be released on Wednesday, the news broke that Mo Farah is not his real name but that of another, and instead of arriving legally with his parents, he was illegally trafficked to Britain at the age of nine and spent his first years in the country doing what essentially amounted to unpaid labour.

“Most people know me as Mo Farah, but it’s not my name, or it’s not the reality,” Farah says down the barrel of the camera. “The real story is I was born … as Hussein Abdi Kahin. Despite what I’ve said in the past, my parents never lived in the UK.”

He was an illegal immigrant, who arrived under a false name.

It is precisely the description of people that the UK government has been most demonising in recent times as they are about to embark on a program to get people like that to be flown straight to – get this – Rwanda, to be put into camps.

(Where did they get the idea to do such a terrible thing? We can only just imagine, yes?)

The plan has had a lot of support because, you know, illegal immigrants arriving under false names are, you know, the cheating scum of the earth, and so don’t deserve to be treated with any humanity. 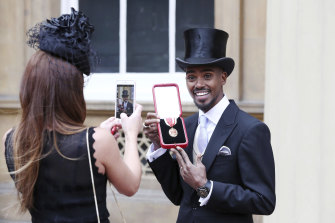 Four-time Olympic gold medallist Mo Farah after he was awarded a knighthood by the Queen in 2017.Credit:PA

But hang on, Sir Mo has the credentials of said cheating scum, but we know he is not like that himself?

Yes, and that is the precise point.

“I had all the contact details for my relative,” Sir Mo says in the documentary, “and once we got to her house, the lady took it off me and right in front of me ripped them up and put it in the bin and at that moment I knew I was in trouble. If I wanted food in my mouth, my job was to look after those kids, shower them, cook for them, clean for them. And she said, ‘If you ever want to see your family again, don’t say anything. If you say anything, they will take you away’.”

And that equally describes the stories of so many illegal immigrants, asylum seekers and all the rest, whatever their legal status.

In his case, Sir Mo went on to contribute mightily to the good name of Britain, despite being an illegal immigrant arriving with false papers.

So, could it be that instead of being the scum of the earth, most illegal immigrants are actually just like him: simply desperate people, ready to go to any ends to escape the death and destruction they have come from in the hope of getting a better life for them and their families?

In Australia, we have got some taste of it generally with the demonisation of the #Biloela family, who had 50 uniformed people raiding them at dawn just hours after their visa had expired, which then saw them detained at Christmas Island for three years as a danger to shipping! Now that they are back at Biloela, which has welcomed them with open arms, it turns out they are just like most other such families – like us, but desperate for a better, safer life.

In sport, through Novak Djokovic being detained for a week in January and talking about it, we became aware that some of his fellow detainees in that Melbourne block had been there for nine years. Djokovic had the good grace – at a time when he was not known for it – to use his own situation to bring attention to their plight, too.

The difference in the case of Sir Mo Farah’s is that his story is one that will resonate for a lot longer than a week.

“This is a really important story,” Rob McNeil, the deputy director of the Migration Observatory at Oxford University, told The New York Times of Sir Mo’s situation. “If you don’t create moments where the exceptional shines a light on the ordinary, you risk a situation where the ordinary is kept out of people’s vision.”

This is such a moment. How many of those the spotlight momentarily fell on when Djokovic was here have similar such stories? How many have contributions to make to Australia that might strengthen us?

I would say many, on both counts.

The Sir Mo Farah story is about a whole lot more than him. It’s about us.