A bitterly disappointed Rohan Browning was unable to repeat his Tokyo Olympics heroics as American flyer Fred Kerley clocked the fastest-ever major 100m heat time on day one of the world athletics championships.

Browning arrived in Eugene, Oregon with high hopes that he could finally join countryman Patrick Johnson in the sub-10 second club.

The conditions were perfect and the track at Hayward Field is lightning-fast, as shown when seven men – headed by Kerley with his run of 9.79 seconds – dipped under 10 seconds.

Browning didn’t even get close. Drawn in the first of seven heats, he could only manage fifth place in 10.22 – a world away from the 10.01 he clocked at the Tokyo Games.

The 24-year-old will now need to regroup quickly ahead of next month’s Birmingham Commonwealth Games. 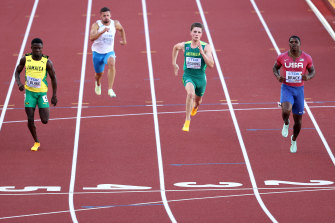 The men’s 100m aside, it was a largely positive opening day for the Australian contingent in Oregon.

Jemima Montag was fourth in the women’s 20km walk – her best finish at world or Olympic level with the promise of even better to come in the near future.

Nina Kennedy needed only one successful attempt at 4.50 m to book a spot in what shapes as a wide-open women’s pole vault final.

“There was a lot of fuss going on inside my head and my body, but outside I think I was cool, calm and collected,” said Kennedy.

“It is the first time I have qualified for a major championship final so I’m pretty proud of myself.“

As it turned out, Henry Frayne could also have sat down after his opening effort of 7.99 m and still cruised into the men’s long jump final on Saturday (Sunday AEST).

Just to make sure, Frayne took a second jump before pulling up stumps to rest his fragile body.

“I’ve been around for over a decade doing this and 7.99 always gets through,” said Frayne.

“But you don’t want to look like the clown who passes his last two jumps and comes 13th or something like that.

“I was half-checked out after the first one because statistically I knew it would be fine.”

The Gold Coast Commonwealth Games runner-up has battled a series of injuries over the years, but at his best is still a world-class competitor.

Former University of Oregon star Jessica Hull led a trio of Australians into the semi-finals of the women’s 1500 m.

Linden Hall, who was sixth in this event at last year’s Tokyo Olympics, and Georgia Griffith also advanced to the semis on Saturday (Sunday AEST) with a minimum of fuss.

Joel Baden produced a clutch clearance on his third and final attempt at 2.28 m – his biggest jump of the year – to advance to the men’s high jump final.

Starc has battled a foot injury for much of the year and decided to prioritise his Commonwealth title defence next month in Birmingham.