Matthew Denny took off down the back straight of the athletics stadium in Birmingham, a large man in lycra bounding away, screaming with a flag on his shoulders and all the speed and endurance of a bowls player. Fortunately, he can throw a plate a long way because as a runner, he makes a very good discus thrower.

Denny won gold after a superb performance when any one of his six throws in the discus would have been good enough to win the gold, but he just kept throwing longer. 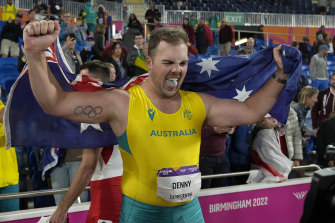 Matthew Denny celebrates after victory in the men’s discus.Credit:AP

His second-last throw was a personal best 67.24 metres. His last throw, which was redundant as he already had the gold, was two centimetres further again.

That distance would have won him bronze last year at the Tokyo Olympics.

“That’s my best competition ever, consistency and just delivering. I am stoked,” Denny said.

“I have never run a 300 so fast. I got a bit gassed on the last bend but I will learn to kick at the end for next time,” he laughed. “I am over the moon, it’s great. 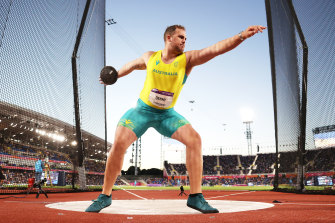 Every throw Matthew Denny made would have won the Commonwealth Games gold medal in the discus.Credit:Getty Images

“Oh jeez. I thought I had a 68m there but coulda, shoulda, woulda, I threw it pretty high on that last one, but I was over the moon.

“I was glad I replicated on that last one, even though you could have gone ‘Pack it in, it’s easy done’, but I wanted to make that statement again and finish off that series.

“This is my first senior title other than world unis, you live for these moments … this is just the start. More to come.”

He began with a throw of 65.26 which put him straight into first place. Every one of his six throws would have won the gold medal.

“I think to have that bit of a statement, to continually put it in and get those performances, I think I am pretty sure that would have come close to medal at worlds. It’s frustrating I have done it late but I really pride myself on doing what is needed when it counts and to do that six times in a row today and to really dominate the comp has been great.”

England’s Lawrence Okoye, a man mountain and former NFL-listed player with the San Francisco 49ers and a handful of other NFL clubs, won silver with 64.99m.

Dubler doing it all and giving his all

If the Olympics offered best supporting actor medals to go with the regular gold, silver, and bronze, then last year Cedric Dubler took the prize.

Dubler was the man in Tokyo who screamed encouragement to teammate Ash Moloney in the final event of the decathlon to push Moloney on to win bronze.

Dubler didn’t sacrifice his own chances – he was out of the medals contention – but his contorted face screaming at Moloney to push hard to the line was one of the enduring images of the Olympic Games.

In Birmingham, Dubler has the chance to move to lead actor role, and it will be his inner voice “Doing a Dubler” and willing himself to the line.

“I wouldn’t say this is my moment yet, that is still coming. I am certainly on the right track, you have to be patient with that, but there is more to come. It feels nice to be out here and up in medal contention so far and on the right track to getting my own medal on the world stage,” Dubler said.

The query on day two of the decathlon is how his body will hold together as he is tiring quickly, given he is doing a second decathlon in just 10 days after competing at the world championships in Eugene. 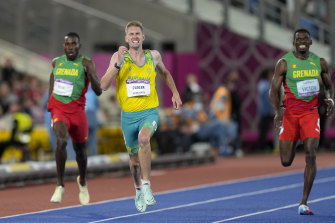 Cedric Dubler (centre) pushes hard in the 400m of the decathon in Birmingham.Credit:AP

“I have had four weeks recovery between decathlons before. I have never done a 10-day recovery, so this is uncharted territory. When I spoke to other decathletes about it no one had really done it before,” Dubler said.

“The legs are starting to get more and more fatigued a lot quicker than usual. I feel like every event, every attempt, every movement is more of an effort than it should be.”

As he crossed the line in his 400m at the end of day one of the decathlon, an official ran over to him with a small cardboard bowl as he looked bilious. Suffice to say the cardboard was not up to the challenge, the decathlon is an all-of-body experience and this was a … gutsy performance.

Teammate Daniel Galubovic is sitting in third place while Alec Diamond, who was given a late call-up to get on a plane and get to England to replace the injured Moloney, is sitting in seventh.

Get all the latest news from the Birmingham Commonwealth Games here. We’ll be live blogging the action from 4pm-10am daily.