In punishing, stifling, morning heat Australian co-captain Steve Solomon, the 400 metres finalist from London, ran better than he has ever run before to again make the semi-finals.

Solomon was the fourth fastest 400m runner for the day as the athlete who faded from international prominence after London, largely through injury and studying in the US, re-discovered his best at the right time. 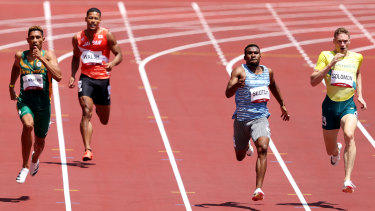 Wayde van Niekerk of South Africa, Japan’s Julian Jrummi Walsh, Botswana’s Leungo Scotch, and Steven Solomon of Australia compete in round one of the men’s 400-metre heats on day nine of the Tokyo Olympic Games.Credit:Getty Images

He is older, stronger, and smarter than in London and could be poised to match his London feats. And then who knows? He believes the London experience sets him up to perform in Tokyo.

“It’s a huge thing. The first time I did it I was 19. Nothing was expected of me and there’s a certain tailwind that comes with that,” Solomon said.

He was a 19-year-old who had just won a medal at the world juniors in 2012 when he was given what was at the time a controversial discretionary pick to run the individual 400m for Australia. He validated that decision by making the final.

“This time around it’s going to be a little different, but I know I’ve got the confidence to do it. I’ve just shown I’m in personal best shape,” he said.

It was another impressive morning on the track for Australia. Solomon’s athletics team co-captain, veteran steeplechaser Gen Gregson, also claimed another place in an Olympic final at her third Olympics. She ran in London and made the final in Rio. 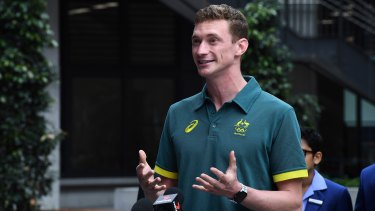 Long jumper Brooke Stratton also made her second successive Olympic final with a jump of 6.6 metres.

Alex Beck was agonisingly close to joining Solomon in the 400m final when his personal best 45:54-second run left him seventh fastest of the non-automatic qualifiers.

Beck was left 0.03 seconds from going through to the semi-final. The three winners of each heat and the next six fastest times advance to the semis. Beck had the seventh-fastest time.

The temperature gauge next to the track said it was 38 degrees. It was not yet 10am. It felt hotter than that. It was stifling. The smell of soft, hot rubber lifted off the track and the humidity just made it feel close and the air thick. There was no wind.

Solomon has spoken before of his difficulty in moderating his body temperature – overheating and taking a long time to cool down even in moderate heat conditions. This was extreme.

While he might struggle with the heat, it certainly brought out his best performance.

Having struggled with injury over the last 12 months, he knew he was physically ready to go. He just hadn’t pitted himself against other runners.

“I’ve come into the competition quite under-raced, with a rocky 12 months of injury, so that was always going to be a test for me,” Solomon said.

“I knew, physically, I was in good shape but being able to execute physically is a different skill to being physically fit. The fact I was able to do that today has given me great confidence heading into tomorrow’s semi-final.”

Gregson ran sixth in her heat in a time of 9.26.11, but it was quick enough for her to advance with the non-automatic qualifiers.

“I wanted to be a bit faster to be honest,” she said.

“I hate being in a situation where you have to sit and wait (to know if you qualify) but it’s (the) Olympics.

“I think I have more in me, I stuffed up a few water jumps which is crucial, when I lose that momentum it is hard to come back.”