Australian hurdler Michelle Jenneke still can’t believe how fast she ran at the recent world championships, and it wasn’t because of the shoes she wore in the women’s 100m hurdles competition.

The times at the world titles in Eugene, Oregon, were quick. The world 100m hurdles record was smashed there by Nigerian Tobi Amusan, who ran 12.12s in the semi-final, with Jenneke running a personal best 12.66 in the same semi. Amusan later won the final in 12.06, but that was with an illegal tailwind. 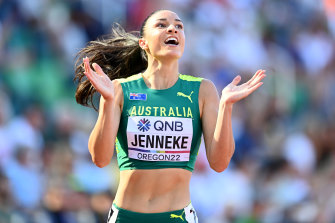 Amusan broke the world record wearing new springy adidas spikes designed for 5000m and 10,000m runners. They have a super-light foam in them compared to traditional sprint spikes, which are stiffer and harder. This prompted debate about the effect of the new technology spikes. 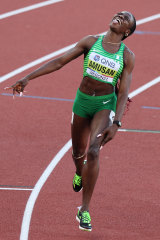 “My abilities are not centred around spikes,” Amusan said.

Jenneke thinks the spikes debate is overblown. She didn’t wear them, and doesn’t think the shoes could contribute so significantly.

Her personal best time at the world titles was the breakthrough performance of her life. “It was unbelievable. I still can’t believe I ran that fast. I keep going back looking at footage of the race and just going, ‘Oh my gosh, did I actually do that?’” Jenneke said.

She blitzed her previous personal best of 12.82, and is now the second-fastest Australian woman behind Sally Pearson. That is good company. “It was incredible. Honestly, a career goal that I have had for a while was to run 12.60 anything so to have done that and achieved that, I am weirdly content, which is odd for an athlete.

“Sally ran 12.28 – let’s not pretend I am anywhere close to where Sally was, she was phenomenal, she could run that time any day of the week, which is incredible. It is awesome to be the second-fastest Australian of all time behind her. She is a pretty incredible athlete to be behind.

“I ran quite a PB in that race and ran in the same shoes that I have been running in for the last five years,” she said.

“I know I can’t attribute my PB to the shoes because it’s the same shoe, the same model of shoe. I have tried some of the newer spikes that they have coming out, the technology is amazing, and I’m sure people are faster but at the same time if you go back 10, 20 years, look at the shoes people were wearing, they were entirely different to what we were wearing five years ago. The technology is forever evolving.

“I don’t think we are seeing anything that is causing that much of a change that it needs to be questioned. World Athletics is constantly reviewing this, they do have a compliance list for the shoes, and they have to be checked. I don’t think there is a huge story personally and in terms of me there is definitely not.”

That said, she also thinks the quality of the current generation of women is so high it will not be long before the world record drops under 12 seconds.

“It seems incredible that someone is going to do that but look at the quality of the field we had, there are so many girls who are so close to it. Everyone is pushing each other along.”

Having hit new times herself, Jenneke is now eager to race again at the Commonwealth Games, and her competition starts on Friday night (AEST). She will do so with fast feet but taking in no expectations.

Get all the latest news from the Birmingham Commonwealth Games here. We’ll be live blogging the action from 4pm-10am daily.