Peter Bol will take a no guts, no glory approach to his gold medal moment in the 800 metres Olympic final on Wednesday night, forcing a fast race and challenging the world to go with him in a battle to outlast them, according to his coach.

Like his teammate Stewart McSweyn, who has vowed not to “die wondering” in his 1500-metre semi-final – where he knows he needs to lift after a heat in which he did just enough to qualify – Bol will take it to the more highly ranked runners that he has so far out-performed at the Games. 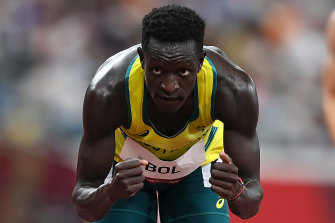 Peter Bol will race for gold in the 800 metres on Wednesday night.Credit:Getty Images

Bol and McSweyn are both serious medal chances, with McSweyn’s semi-final on Thursday night and the final a prime event on Saturday night.

The pressure of expectation that has come to Bol this year is something that he would have struggled with at the last Olympics, his coach Justin Rinaldi admitted. But this year he has embraced it and is feeding off it.

“He will give himself the best opportunity to try and win it, he won’t run safe and walk away sixth. We don’t want a slow race and be sixth in a slow time. He’d rather push it and give himself a chance to win and fall short than sit back and let them run a slow race and finish sixth.

“I think five years ago he would have crumbled underneath this kind of attention but this time he has embraced it. He is on social media. He keeps to himself in the village but then he gets on social media and responds to people. He loves it.”

Fellow distance runner McSweyn got through his heat unscathed on Tuesday morning but knows he will need to do more when it comes to the semi-final on Thursday night. 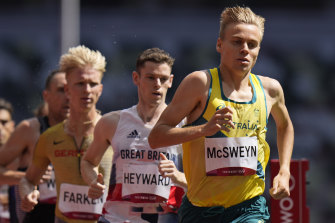 Stewart McSweyn has made it to the 1500-metre semi-finals.Credit:AP

McSweyn ran an aggressive race in the heat, setting the pace and leading throughout to finish in 3:36.39.

“I am happy to get through but I am going to have to lift in two nights’ time,” McSweyn said.

“I was kind of surprised no one else wanted to take on the pace but I am in good shape. I am fit. I was happy to do it.

“I knew on that last lap, I had a quick look at the camera and I knew that I had it, I had a lot to give, and I thought I would comfortably be in that top six.

“The big aim in the first round is just to get through, you probably have more to lose than win so I am happy to get through, tick the box and make sure I am ready to go in two nights’ time.

“I have a plan for the semi, the big thing was just to do what I needed to to get through the first round. I know that I need a lift for the semi.

“Every time I put on this Aussie top I feel that special feeling, I cannot give anything less than 110 per cent so that is what I will be trying to do. I won’t die wondering.”

Oliver Hoare, too, was aggressive, mindful he had drawn the unenviable heat with world record-holder Timothy Cheruiyot.

Hoare, an old schoolmate of sprint star Rohan Browning, was inspired by his friend, who he hadn’t seen in years until they reacquainted in the athletes’ village. Hoare was third in his heat in 3:36.09.

“Rohan and I hadn’t seen each other since high school, I saw him in the village and gave him a big hug. I have been wanting to see him for so long, his career has been fantastic,” said Hoare.

“He helped me along with my speed, I was screaming when he won that heat.”

He had a tough heat but put himself towards the front and claimed a top-six place.

“You can’t take anything for granted. I’m used to a bit of a rough race, it’s a non-contact sport but you get a bit of contact sometimes.”

Hoare has been living in the US after graduating from the University of Wisconsin.

“I made a lot of sacrifices to go to the United States, leave my family and friends for another country. I knew it was the right sacrifice for me to develop into one day representing my country. I believe that sacrifice is paying off right now,” he said.

Jye Edwards, the national title holder, finished seventh in his heat in 3:42.62.

Bendere Oboya ran a surprisingly flat race in her heat of the 400 metres and was unable to advance. Oboya had a scintillating Australian summer and said she was in good condition