Rohan Browning is convinced he can smash through the magical sub-10 second barrier before the end of the European season as he chases down Patrick Johnson’s long-standing Australian record.

Browning, 23, will continue his post-Tokyo ambition to push the limits in the blue ribbon event with meets in northern Italy and Brussels this week.

The Sydney University student has spent the past few weeks sitting a delayed federal constitutional law exam and briefly reflecting on his Olympics debut, which included a stunning 10.01s heat win against a crack field including former world champion Yohan Blake.

He was eventually run out of the competition when fifth in his semi-final, lamenting a sluggish start before clocking 10.09s.

Browning already has a wind-assisted 9.96s run to his name at a Wollongong meet earlier this year, but the time was ruled not legal given the conditions.

It hasn’t deterred him from chasing further success before the end of the European season, setting his sights on a legal mark which will put him rarefied Australian sprinting air. 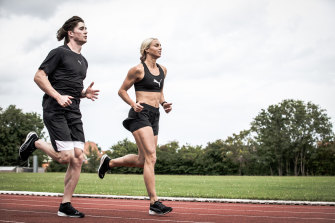 “I’d like to think I can [break 10 seconds] if you get the right race and conditions,” Browning told the Herald as he prepares to launch a new Puma campaign alongside NRL flyer Josh Addo-Carr, dubbed the “fastest man on the planet” by Nine rugby league commentator Phil Gould.

“I wanted so badly to run sub-10 in the semi-final and to go through to the final. I think I was just so inexperienced running at that level against those guys. Physically it was possible, but I didn’t perform on the day in that race.

“In the 100 metres there’s just no room for error. I just want to live and learn from it, which is why I was so keen to come over to Europe and run the circuit to keep trying to chip away. I’m in good shape, so I want to capitalise on that. I don’t want to pack it in and go home yet.”

The flying mullet admits he’s not the most sentimental person, but there are key lessons to be learned after being thrust into the nation’s conscience along with high jumper Nicola McDermott, decathlete Ash Moloney and middle distance star Peter Bol following Tokyo’s track and field program. 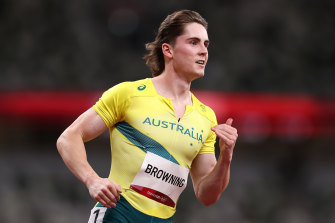 Rohan Browning’s win in the 100m heat in Tokyo excited the nation.Credit:Getty

But it hasn’t been all rainbows and skittles.

He had to take a 10-hour train trip to Rovereto for this week’s meet and then will quickly return to Belgium for the Diamond League showdown, all the while juggling the studies that were put on the backburner as he prepared for the Olympics. 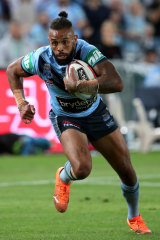 Josh Addo-Carr is one of league’s fastest men.Credit:Getty

And then there was shooting his first commercial since Tokyo, promoting Puma’s new Nitro running shoes.

It has fun with Gould’s oft-repeated claim in commentary that Addo-Carr is the “fastest man on the planet”, before the Australian and State of Origin representative officially passes the baton of Australia’s quickest to the sprint sensation.

The promotion was shot in different parts of the world, Addo-Carr from the Storm’s Sunshine Coast bubble and Browning in Germany.

“I’ve definitely heard [Gus] roll it out a few times when I was running,” Browning said.

“You see it written in comments on Facebook, Twitter and Instagram. It’s definitely taken on a life of its own, but it is funny. From the outside looking in a lot of people saw me win my heat and it probably looked like a real overnight success, but people just don’t see [it’s been years in the making].

“As crazy as it might seem, I always expected that of myself. If you don’t think that’s a possibility, then why are you there? That was my attitude.

“I think one of my biggest regrets was I never stopped to soak it in enough. I finished the heat and my first thought was, ‘I’ve got to get back for the semi-final and rest, I’ve got to have a sleep’. After that heat run my phone was blowing up I had to switch it off. I was so amped on adrenalin I barely slept that night. Then the next day I probably didn’t fall asleep to 3 o’clock in the morning.

“That’s something no one prepares you for, the ins and outs of championship racing which just comes with time.

“You don’t know how many years you’re going to have in the sport. I’m young in the sport and I’m trying to learn about patience, but there’s also a sense of urgency about getting runs on the board because you can’t take it for granted.”